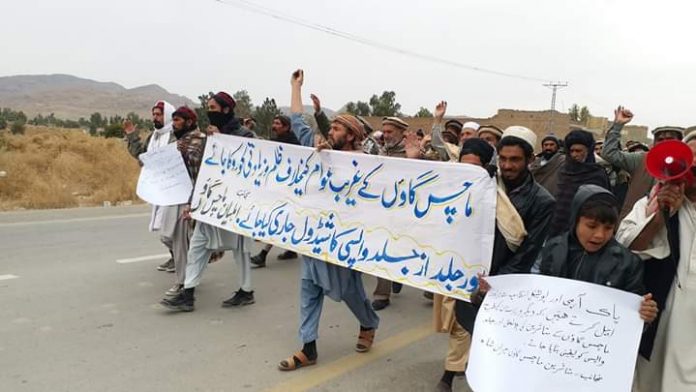 MIRANSHAH: The residents of Matchis Killi area of North Waziristan tribal district on Friday held a protest demonstration for their repatriation to their native area.

A large number of displaced people from Matchis Killi took part in the protest which was held in front of Miranshah Press Club. The protesters were holding banners and placards inscribed with slogans in favour of their demands. They said their area has been cleared by the security forces in the military operations, but the local residents have not been allowed to come back to their homes. They said they are extremely perturbed over long displacement from their native area and can’t wait to return their original homes.

Malik Alam Khan, Malik Rehman, Malik Mashal and Gul Alam, who were leading the protest, said the people displaced from Matchis Killi are facing many difficulties in extreme cold weather. They said they are extremely home sick due to long displacement and want to return home without further delay.

Fata Disaster Management Authority (FDMA) says about 98 percent displaced people have returned to North Waziristan and the remaining will return soon. Some of the families in North Waziristan had also migrated to Afghanistan during military operation and many of them have also returned.