MIRANSHAH: The issue of plucking of pine nuts (chilgoza) from forests in Shawal area of North Waziristan has got further complicated as the local people have announced to detain the people of Ahmedzai Wazir tribe and confiscate their vehicles.

The area people said they have taken this decision as their people are not being allowed to enter the chilgoza forests in Shawal. They said they have formed a 60-member committee for implementation of the decision.

Chief of Waziristan Malik Moweez Khan and other elders said while addressing the committee members on Monday that the committee is fully empowered to take action against the members of Ahmedzai Wazir tribe. He said the area people would lend full support and help to the committee members in carrying out their actions. He alleged that the government, instead of resolving the issue, was further increasing the problems of the local people, which compelled them to take this decision.

The elders alleged that the members of Ahmedzai Wazir tribe collect pine nuts from their forests under the government patronage. They claimed that the members of Gomal Jirga possess evidence to support their allegations. They said the committee members will confiscate the vehicles of Ahmedzai Wazir tribe on Miranshah Road and then they would show their compliance to the Jirga elders.

The Jirga members called upon the government to intervene and resolve the matter quickly before the situation gets out of hand. They said their men should be allowed to go to chilgoza forests as it is their right.

The people of Janikhel, Handikhel and Mamandkhel union councils in Bannu have once again staged protest against inclusion in Bakakhel tehsil.

The people of these areas protested on the drumbeats and vowed that they will not accept inclusion in Bakakhel tehsil at any cost. They said their old tehsil Bannu is very easily accessible to them, while Bakakhel tehsil is far away from their areas and will create unnecessary troubles for the area people. 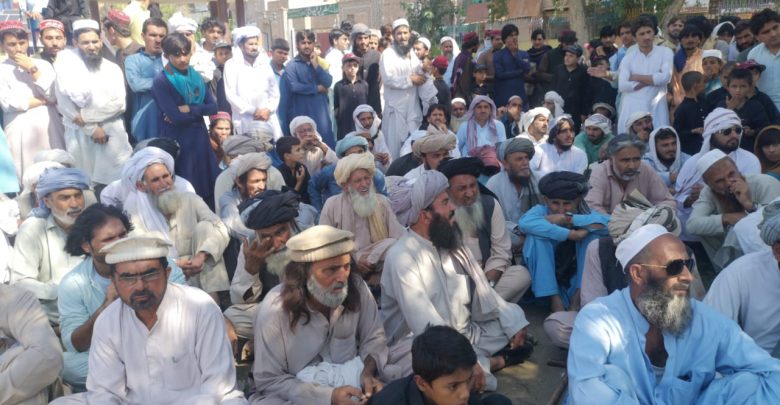 The area elders said tehsils are formed to facilitate the people, but the Bakakhel tehsil is first in the history which is formed to trouble the area people.

Assistant Commissioner Allah Noor reached the site of the protest and said after talks with protesters that the administration will not do injustice to any person.

A committee was also formed to hold talks with the district administration on the issue.