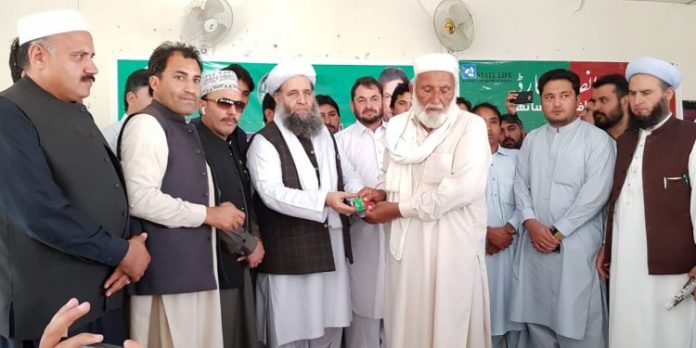 JAMRUD: The distribution of Sehat Insaf Cards launched by the federal government formally kicked off in Khyber tribal district on Saturday.

A ceremony in this regard was organised at the Jirga Hall in Jamrud where Federal Minister for Religious Affairs Noorul Haq Qadri distributed Sehat Insaf Cards among the deserving people.

Speaking on the occasion, Noorul Haq Qadri said the distribution of Insaf Cards has been initiated in the tribal districts on the directions of Prime Minister Imran Khan. He said the tribal people deserve the Insaf cards more than anyone else as they were troubled by militancy, military operations and then lived in displacement for several years. Besides that, hospitals and healthcare facilities have also been damaged in the tribal areas during the militancy.

Noorul Haq Qadri shrugged off criticism of opposition on the plan of the government to distribute goats and hens among the poor people, saying that it is a very effective strategy to help the deserving people. He said the people should not pay heed to the critics who are making fun of the government’s initiatives for the poor.

The federal minister announced that Prime Minister Imran Khan will address a massive public gathering at Jamrud Stadium on 5 April.