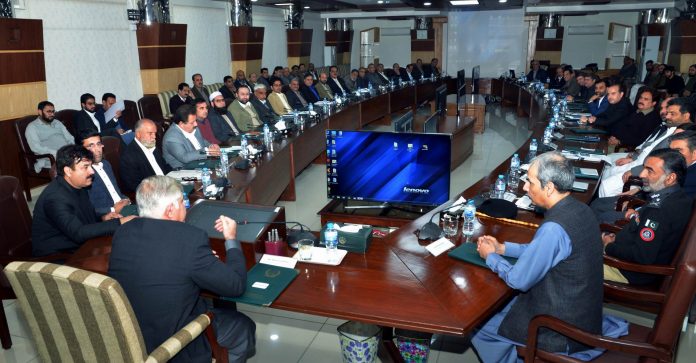 LANDI KOTAL: District administration Khyber on Wednesday announced that all the preparations for the first-ever meeting of Khyber Pakhtunkhwa cabinet in the district Khyber have been completed.

The deputy commissioner, district Khyber, Mehmood Aslam Wazir while briefing the media about the preparations said that strict security measures have been taken to ensure for the cabinet meeting. “Strict security measures have been taken on the Pak-Afghan route,” said the Deputy Commissioner. “All vehicles coming from Peshawar are being properly checked by the security forces.”

On January 2, Chief Minister Mahmood Khan announced holding the next cabinet meeting in the Khyber tribal district Khyber. It will be the first meeting in any tribal district after its transfer from the federal to the province through a constitutional amendment. The Chief Minister believes that it will enable all the provincial ministers to visit and interact with the people of the different new district and get first-hand information about the issues faced by the people of the area.

On the other hand, the local leadership of Jamiat-e-Ulema Islam-Fazal (JUI-F) announced that the KP government will never be allowed to hold a successful cabinet meeting and will arrange a massive protest against it. Mufti Ijaz Shinwari leader of JUI-F and FATA grand alliance has given a call from for general strike against the cabinet meeting in the district.

“JUI-F will stage a sit-in on the Pak-Afghan road and will never let them hold a successful meeting,” announced Mufti Shinwari. The JUI-F leadership is against the transfer of tribal areas to the province from the day first. The JUI-F is of the view that the decision has been imposed on the tribal people without giving them an opportunity to decide whether they want to join the province or remain a separate federating unit.

The general public of the district appreciated the government move to hold the meeting in Khyber however, they asked the government that the efforts should not only be limited to announcements and practical steps should be taken to provide basic facilities of life to the people of tribal areas.