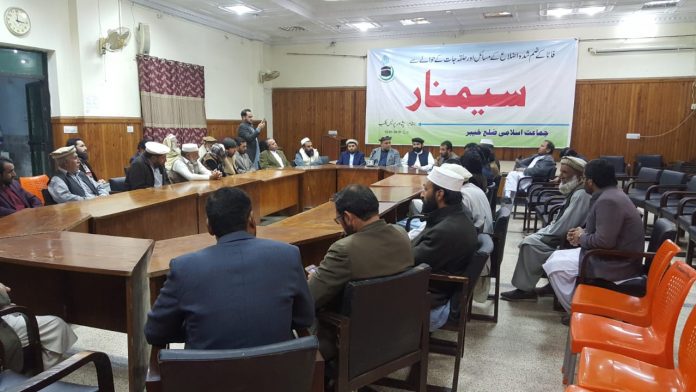 PESHAWAR: The political leadership of district Khyber has asked the Election Commission of Pakistan (ECP) to rethink the delimitation process for the district and allocate provincial assembly seats to the district on the bases of its population.

The leadership was of the view that merit was ignored and just three KP assembly seats were given to the district which is totally opposite to its population. They were gathered at a seminar at the Peshawar press club on Saturday to discuss the issues of the tribal areas after its merger with the province.

The seminar was organised by Jama’at Islami, district Khyber.

“The delimitation has violated the rights of the tribal areas,” said Shah Faisal, the district Khyber Amir of the Jamaat-e-Islami. He demanded that the people of the tribal district must be provided with their 3 per cent share in the National Finance Commission (NFC) award so that it could be spent on the progress of the much-neglected areas of the country.

Shahji Gul, a tribal elder and politician from district Khyber said though the area has been merged with the province, but the people are still faced with numerous issues which need to be addressed on priority bases. Gul lamented that all the decisions are being taken by the chief minister and the governor of the province without the consultation of tribal elders.

“The PTI government isn’t ready to give the tribal people their due share in NFC award,” said Shahji Gul. “The whole burden of tribal areas has been placed on the KP province which will further weaken its economy.” Gul has also criticized the 2017 census in tribal areas adding that the population of tribal areas have been undermined which will not only affect their shares in Assemblies but will also reduce their share in the NFC award.

“The health, education and other infrastructure of tribal areas have been completely destroyed,” Shahji Gul remarked. He asked the federal and provincial government to declare the tribal areas a tax free zone for 30 years so that the people can stand on their own feet.