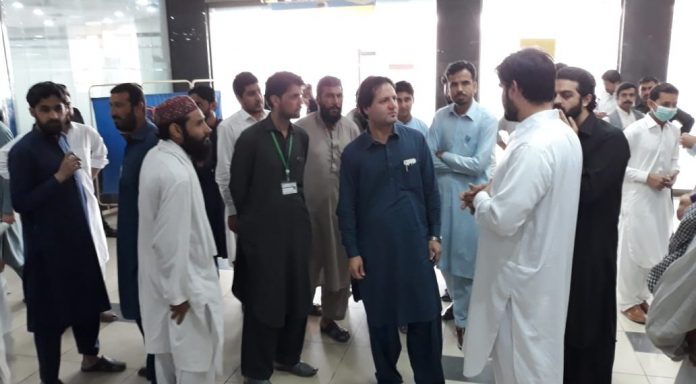 PESHAWAR: The Doctors Council in Khyber Pakhtunkhwa has given a call of strike after an altercation between KP Health Minister Hasham Inamullah and doctors at Khyber Teaching Hospital (KTH) in Peshawar on Tuesday.

The doctors have said all the OPDs (Out Patient Departments) and other services will remain suspended at government hospitals today (Wednesday). However, the emergency departments of the hospitals will remain open.

A video surfaced on Tuesday in which it can be seen that Health Minister Hasham Inamullah was involved in a brawl with young doctors at KTH. Sources said Assistant Professor Ziauddin was tortured during the quarrel at KTH and the health minister was also slightly injured.

The sources said Hasham Inamullah and Dr Nowsherwan Barki had come to KTH for the policy board meeting. Young doctors, who are protesting for the last several days on the issue of their transfers, were also present there. The sources said the young doctors attacked the minister and Dr Barki in which the minister was slightly injured. The guards of the minister rescued him and took him away. In the process, Dr Ziauddin, who was also accompanying young doctors, also received minor injuries.

The minister said after the incident that young doctors were indulging in propaganda and blackmailing to avoid transfers. The Health Department transferred 674 doctors on Friday to health centres which were in dire need of doctors. The minister said provision of best healthcare facilities to all the people is among the top priorities of the government and no compromise will be made in this regard.

Hasham Inamullah strongly rejected the news circulating on the media that he along with his guard attacked Dr Zia. He said doctors were holding protests, blocking roads and causing trouble for the people by closing the OPDs. He said only few doctors are involved in this practice and they are bringing bad name to this noble profession.