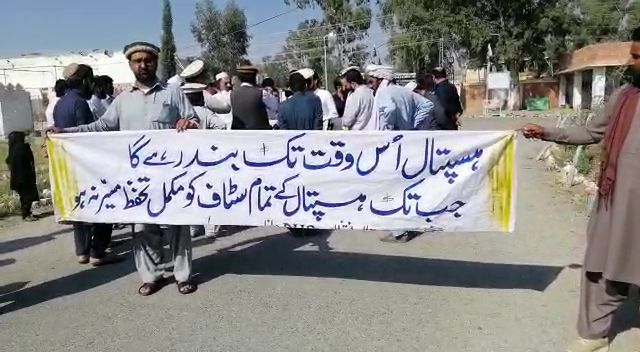 WANA: Authorities have failed to recover Dr Noor Hanan, who was kidnapped from South Waziristan tribal district on Wednesday.

Doctors of government and private hospitals in South Waziristan on Thursday staged a protest demonstration and boycotted their duties against kidnapping of the doctor and failure of the authorities to recover him. The Doctors Association demanded that the safe release of Dr Noor Hanan must be ensured and security must be provided to doctors. The Doctors Association said their protest will continue till recovery of Dr Noor Hanan. All the departments of hospitals, except emergency departments, will remain closed during the strike.

Meanwhile, Assistant Commissioner Wana Ameer Nawaz Khan said Dr Noor Hanan was kidnapped by unknown armed men on Wednesday who entered the TB Hospital Wana and took away the doctor while locking the staff of the hospital in a room. The assistant commissioner said checking on all the entry and exit points of Wana has been increased and a search operation is also continuing for recovery of the kidnapped doctor.

To a question that whether the Khassadar personnel were not on duty or they did not offer resistance during the kidnapping, the assistant commissioner said the district police officer (DPO) can tell about it. He said the administration is also investigating the state of security measures at the hospital. He said he is hopeful that the kidnapped doctor will be recovered soon.

Ajmal Wazir warned that strict action will be taken against those who are disturbing law and order in South Waziristan.

On April 24, Muhammad Riaz, an Additional Collector of Inland Revenue, was abducted on gunpoint by unidentified armed men from his home town in Tank along with three relatives and a guest from their Hujra. On July 19, they were recovered from South Waziristan after four months.