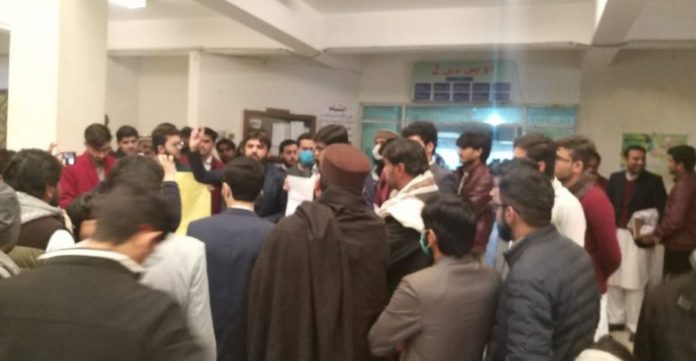 BANNU: The young doctors in Khalifa Gul Nawaz Hospital Bannu on Monday held a protest demonstration against alleged illegal appointments at the hospital and non-display of merit list by the board of governors (BoG).

Dr Saifullah Khan said while addressing the protesting young doctors that Pakistan Tehreek-e-Insaf (PTI) government in Khyber Pakhtunkhwa has failed to pursue the policy of merit and transparency in making appointments. He alleged that Dr Hasham Inamullah, in collusion with Akbar Jan Marwat, both hailing from Lakki Marwat, have appointed people from Lakki Marwat instead of Bannu in Khalifa Gul Nawaz Hospital. He alleged that merit was openly violated by ignoring local applicants and selecting people from Lakki Marwat on the basis of nepotism.

Dr Saifullah said the BoG knows that merit has been violated in the appointments that is why it is not displaying the merit list of the newly-appointed hospital staff. The protesters alleged that Director Akbar Jan had a track record of nepotism as he had also appointed his nephew, hailing from Lakki Marwat, when he was serving in the District Headquarters Hospital Bannu. They said Dr Akbar Jan was suspended on the report of the district administration, but he was restored when Dr Hasham Inamullah became the health minister. They said Dr Hasham Inamullah also promoted Dr Akbar Jan and transferred him to Khalifa Gul Nawaz Hospital.

The protesting doctors called upon Prime Minister Imran Khan to take notice of illegal appointments in Khalifa Gul Nawaz Hospital. They said they will observe complete strike and close all wards of the hospital, including the Emergency Department, if the government did not take action within three days.

The portfolio of Hasham Inamullah was changed in the recent cabinet reshuffle and former Local Government Minister Shahram Khan Tarkai is now the new health minister. Media reports said the portfolio of Dr Hasham Inamullah was changed because of his uneasy relationship with the doctors and failure to achieve the set targets in the Health Department.