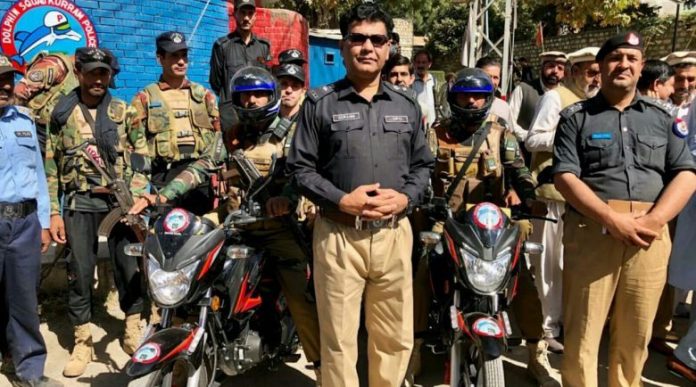 PARACHINAR: Kurram Police has established Dolphin Police squad to ensure law and order in the city and curb street crimes.

A ceremony regarding establishment of Dolphin Police squad was held in Parachinar on Wednesday which was attended by police officers and local elders in large number. On the occasion, keys of motorcycles were handed over to Dolphin squad.

Speaking on the occasion, District Police Officer (DPO) Muhammad Quraish Khan said that Khyber Pakhtunkhwa Police is taking different steps for providing security and justice to the people of merged districts since the merger of erstwhile Fata with KP. He said there are many narrow streets in Parachinar where the entry of police mobile vans is not possible. He said Dolphin Squad has been created to keep an eye on law and order in the city’s streets. He said policemen will remain present in streets round the clock to ensure peaceful environment and to curb street crimes.

The DPO said Parachinar city and Sadda Qadeem areas have been divided into six sectors for patrolling of Dolphin Squad. “The Dolphins would be working 24/7 in three shifts. In phase 1, the squad is established in Parachinar city covering 5 kilometres radius area. In second phase, Dolphin Squad shall be established for Sadda city,” said Quraish Khan.

“Dolphin nomenclature is used as in Lahore Police for its intelligence — sleeping with one eye open — friendly and social nature,” he added.

A local tribal elder said Dolphin Squad has brought down street crimes in Lahore to a great extent and this successful experiment will also work well in Parachinar. He said the youth of Parachinar are very talented and they want to join police force to play their role in nation building.

The tribal elders appreciated the role of Parachinar Police and said all facilities must be provided to policemen so that they could perform their duties more efficiently.