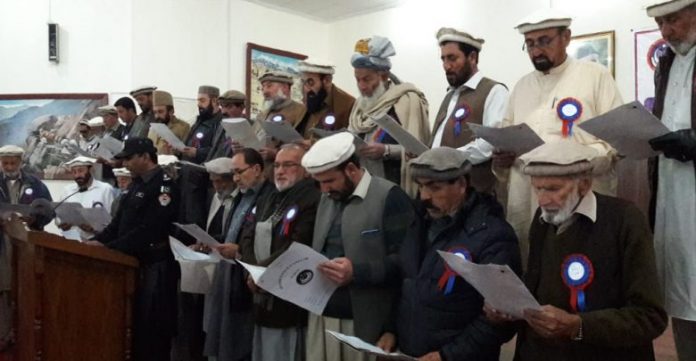 PARACHINAR: The members of the Dispute Resolution Council (DRC) in Kurram tribal district have taken oath of their new duties amid criticism from local Member KP Assembly Iqbal Said Mian about the council composition.

District Police Officer (DPO) Muhammad Quresh Khan said on the occasion that DRCs comprising 21 members each from Upper and Lower Kurram have been formed. He said DRC system has been introduced in the tribal districts under the Police Act under which such disputes will be resolved which doesn’t need registration of a first information report (FIR) with police and parties to dispute agree to hand over the powers of dispute resolution to Jirga members.

The DPO said the DRCs will resolve small disputes of people on police station level. He said each Jirga will have the jurisdiction like the police stations. He said the establishment of DRCs will give relief to people and their disputes regarding water, lands, loans, vehicles etc. will be resolved quickly without any expenses.

At the end of the ceremony, Muhammad Quresh Khan took oath from the DRC members. The DRC members vowed to work selflessly and to fully cooperate with police for resolution of problems faced by the area people.

Meanwhile, the ruling Pakistan Tehreek-e-Insaf (PTI) MPA from Kurram Iqbal Said Mian said the DRCs are formed in best interest of the people of merged districts, but the composition of the Jirga in Kurram has become controversial because of inclusion of some people with tinted repute. He explained that such people have been included in the Kurram DRC who are known for causing massive damage to development of merged districts in the era of Frontier Crimes Regulation (FCR). He said these people represent the FCR that is why they are unacceptable to people of tribal districts.

Addressing a press conference in Parachinar, Iqbal Said Mian demanded the government to include honest and upright people in DRCs. He said he will approach the government high ups over this issue. He said he had informed police officials about his reservations about the DRC members, but no one paid heed.

Establishment of DRCs in merged districts have divided the local population as these Jirgas are strongly opposed in Khyber and Mohmand t districts, while similar Jirgas were welcomed in Bajaur. Now objections are also being raised over DRC in Kurram.