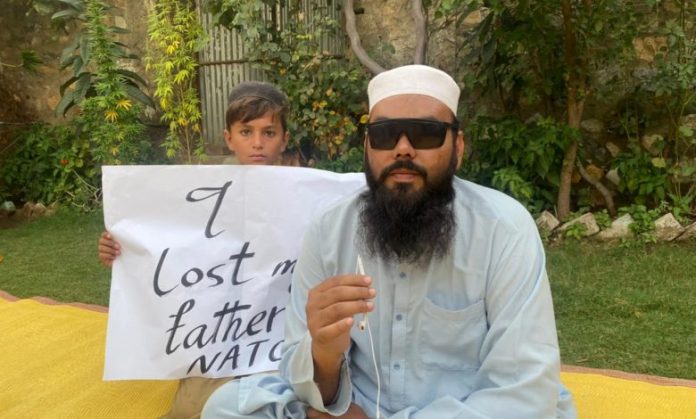 PESHAWAR: After 9/11, the US along with its allies waged a war in Afghanistan which continued for about 20 years. A large number of people lost lives in this war, and many others were maimed.

Irshad Khan from Landikotal tehsil of Khyber tribal district was also among the victims who lost his eyesight in a militant attack. He said he was supplying oil for Nato forces in Afghanistan through a truck when the militants attacked the truck with bullets in Baghono area near Jalalabad. He said although he survived the attack, but lost sight in both of his eyes.

Irshad Khan said the sightscreen of his truck was broken in the indiscriminate firing and he taught that it would be last day of his life. He said the broken screen pieces hit his eyes and he lost vision. He said he was taken to a health facility in Jalalabad where facilities were not enough. Later on, he was shifted to Peshawar where he bore all treatment expenses and spent everything he had at that time.

Irshad Khan said the whole world is well aware of what happened in our region after 9/11. However, he said, the vested interests did not pay attention to those people of Khyber Pass who lost their lives or were rendered disabled while supplying necessary items for Nato forces. He said the contractors and company owners received full payment for Nato supplies, but the families of poor drivers and cleaners killed or maimed in militant attacks did not get any help.

The former driver said although the US has left Afghanistan, but thousands of people affected by the war are now living a miserable life. He said all the affected people of militant attacks must be provided assistance, otherwise they would be compelled to hold protests outside the US embassy in Islamabad.

Hundreds of people were killed, and many others were injured during so many attacks on Nato supply trucks on both sides of the Pak-Afghan border. Irshad Khan said it was a matter of great disappointment that the vehicle owners got insurance, but there was no value for human life. He said the affected people also deserved to be helped on humanitarian grounds.