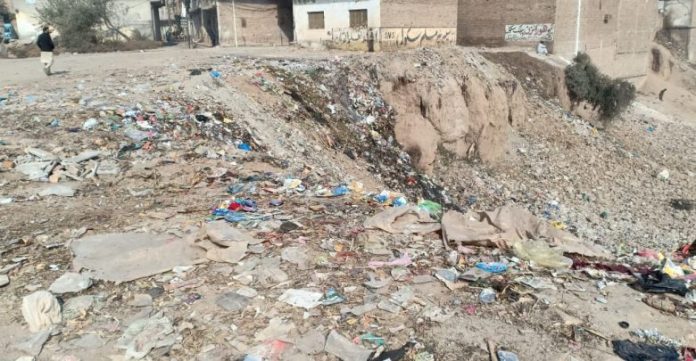 PESHAWAR: The dumping site in Rasheed Garhi, Peshawar was once occupied by brick kilns. The duping site is a cause of nuisance for the nearby residents due to stinking smell emanating from the garbage and flies hovering over the stale and used food items and other waste material.

When someone sets fire to the polythene shopping bags at the dumping site, it further creates bad smell and suffocating smoke making the lives of the area residents difficult.

Darweshabad Mohallah in Rasheed Garhi has about 50 homes, most of which are multi-storey, indicating the large number of population. All the residents throw their garbage on this dumping site and the Municipality officials don’t regularly come to lift it.

The local people ignite fire to the dump by using dumped plastic bags, cloth and other dry material from time to time which is not a permanent solution to the problem.

“Sometimes, someone throws dead animal or chicken on the garbage dump which creates nauseating smell for several days and spread disease in the area,” Ahmed Saeed, a local resident, told TNN.

Ahmed Saeed, who lives in the area for the last 10 years and also runs a shop there, said the concerned departments don’t lift the garbage from this area for several months. He said the people from nearby neighbourhoods also started throwing garbage in Darweshabad after which the locals had to stop them from doing so.

The increasing population pressure in Peshawar city, the open dumping areas like that of Darweshabad are increasing which has become a regular headache for the residents as well as the concerned institutions i.e. Water and Sanitation Services Peshawar (WSSP), Cantonment Board and Peshawar Development Authority (PDA).

According to the 2017 Census the population of Peshawar is 4.2 million, out of which about 3 million people live in urban areas. The WSSP, which is responsible for sanitation in most of the urban union councils, says the city generates about 1,000 tons garbage daily which is being dumped at various sites. Besides that the cantonment areas of the city also generate about a hundred tons garbage daily.

The WSSP spokesman Hasan Ali told TNN that dumping sites have been made in Shamshatoo and Musazai. He said about 3,000 staff of WSSP remains busy throughout the day to lift the garbage and dump it.

Recently, people living near the dumping sites clashed with the WSSP officials over the issue. People of Hazar Khwani in September last year and Latifabad and Afridi Garhi on the Ring Road in March this year stopped the WSSP vehicles from dumping garbage in the dumping sites near their residences and they had also staged protests in this regard.

Former chief minister Pervaiz Khattak had formed a committee after people’s protest to find a permanent suitable dumping site in Peshawar where dumping should be carried out on modern scientific lines.

The Peshawar High Court (PHC) while hearing a related case in April this year had ordered the KP government not to dump garbage near residential areas and search a dumping site in Shamshatoo far from residential areas.

However, there are many other sites like Derweshabad in the city where garbage is dumped and people raise fingers on the performance of the WSSP.

Gul Zameen Bibi, a resident of Minskeenabad, told TNN that her family is extremely disturbed due to garbage dump and has decided to shift to some other place. She said flies however over the garbage dump and also enter houses and cause diseases.

“I was diagnosed with hepatitis few months back and doctors told me that it’s because of this garbage,” she said.

Environment and Waste Management official Maqbool Hussain claimed in his research in 2016 that only 40 percent of garbage produced in Peshawar is being lifted and dumped, while 60 percent is thrown in streets and open dumping places.

However, the WSSP spokesman said the company lifts about 800 tons garbage and in some areas the garbage lifting is the responsibility of CDA and Cantonment Board. He admitted that it is difficult to go through some narrow streets in the city to lift garbage and handcarts are being used for garbage lifting from such areas.

Garbage heaps are also visible in various areas under the Cantonment Board and CDA and people in these areas are also confronted with the same problems.

The CDA has selected a dumping site in Al-Haram Town in Hayatabad where garbage is dumped under the open sky.

Mudasir Orakzai, a resident of the area, told TNN that locals are disturbed with the dumping site, but no one is listening to their complaints. Mudasir, who was wearing a mask, said even light wind creates smell all around the area and causes diseases.

The PDA spokesman Umair Afridi said this is a temporary dumping site and talks are underway with the provincial government for a permanent site like that of WSSP.

Different countries are producing electricity from solid waste which is considered a good option. Pakistan will initiate its first such project in Mardan and in this regard an agreement was also signed with a Chinese company in May this year. Under the project, 12 megawatts electricity will be produced from solid waste in Mardan.

A similar 40MW plant will be set up in Lahore, Punjab, which is expected to complete in the next two years. The WSSP spokesman said talks are being held with Chinese and Turkish companies for establishment of such a plant on the Shamshatoo duping site.

Professor Riaz Muhammad, who initiated the project, claims that he can produce about 20,000 kilowatts electricity if the government provides ten to twelve thousands tons solid waste on daily basis.

However, the WSSP spokesman says power projection from solid waste in Peshawar may not be a viable option as the proportion of plastic bags and other such materials in the waste is much higher.