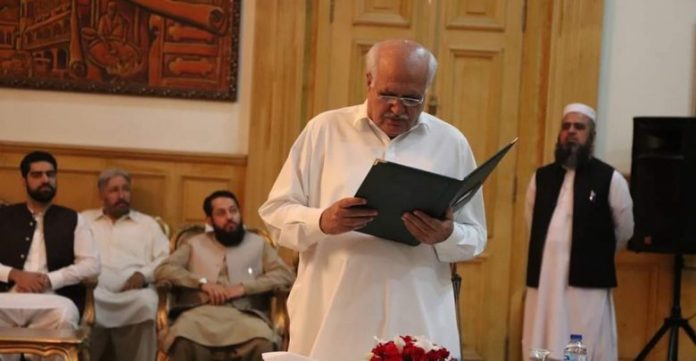 PESHAWAR: Governor Khyber-Pakhtunkhwa, in the presence of the chief minister, has administered the oath to Liaqat Khattak as the minister for irrigation in the Provincial cabinet on Monday.

Though PTI chief, Imran Khan has strongly criticised his rival parties of dynastic politics, however, in his own party, Pervez’s four family members are MNAs and two MPAs who were elected in by-election.

Liaqat Khattak is a former Nazim of district Nowshera. However, vacated the seat of Nazim and contested the by-election on PK-64 and was elected on the PTI ticket as a member of Khyber Pakhtunkhwa Assembly.

Pervez Khattak had contested the July 25, 2018 election on three seats – two provincial and one National assembly. He won all three seats NA-25, PK-61 and PK-64 but the central leadership has asked him to keep NA-25 so that he can be inducted in federal cabinet as defence minister.

The seat was vacated and one seat ticket was given to his brother Liaqat Khattak and on PK-61 Nowshera-I, he forced the party to grant ticket to his son, Ibrahim Khattak. Ibrahim got success in a by-election and now he is a member of KP assembly where is the member of Housing Department / Provincial Housing Authority.

Pervez Khattak sister in law, Nafisa Khattak and his niece Sajida Begum have been brought into the assembly on reserved seats. While his son Imran Khattak is the member of National assembly from Nowshera’s NA-26. In 2017, his son in Law Adnan Khan has joined PTI from PPP.

Pervez Khattak has tried to re-elect him as senator on technocrat seat, however, he couldn’t succeed in his efforts.