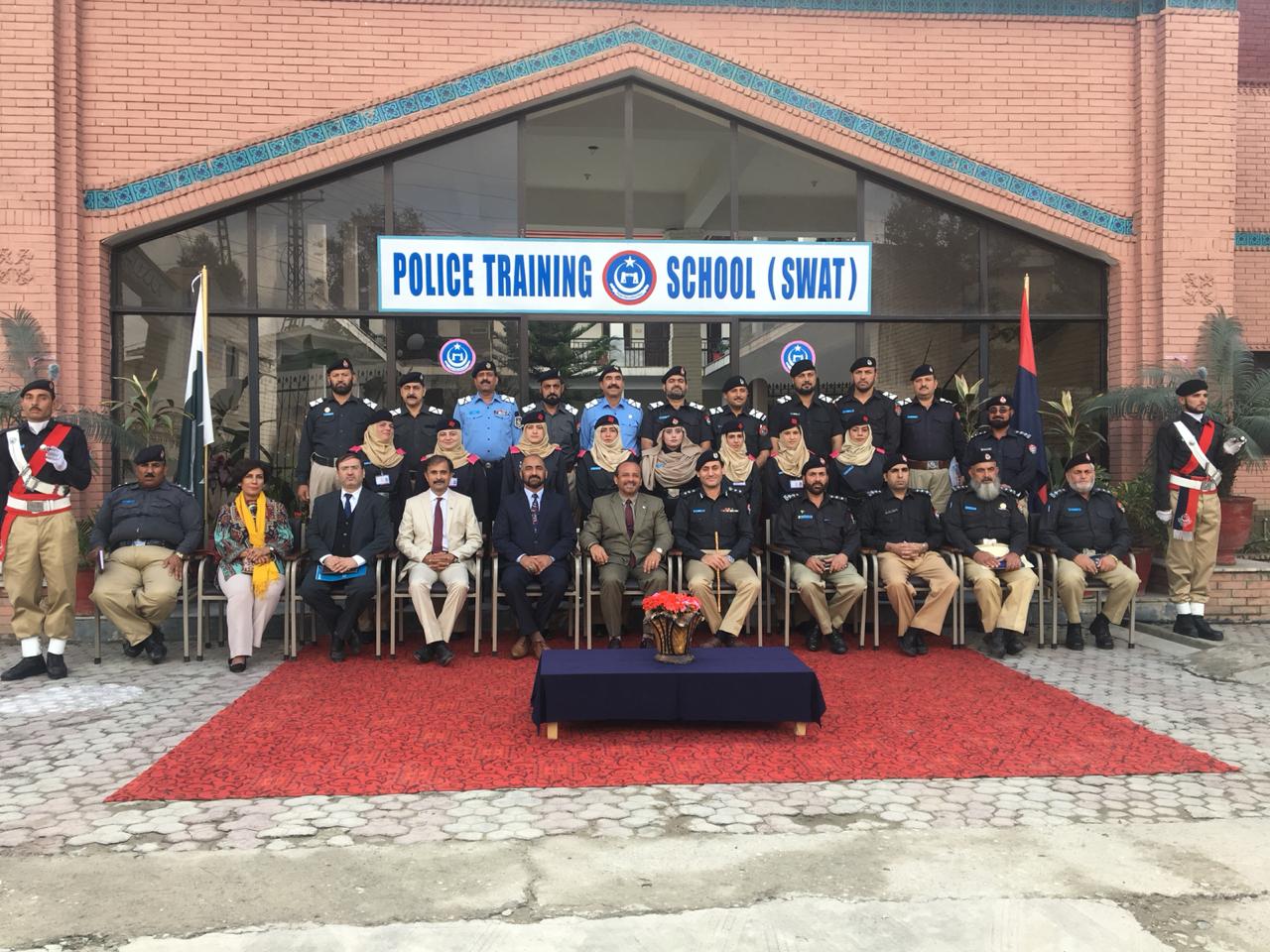 SWAT: The Regional Police Training Centre Swat has received ‘e-Learning’ curricula from the United Nations Office on Drugs and Crime (UNODC) to enhance the core policing and law enforcement skills of its police officers to international standards.

Syed Fida Hussain Shah, DIG (Training) Khyber Pakhtunkhwa Police, inaugurated the e-Learning Centre along with UNODC Country Representative Cesar Guedes at the Swat Training Centre, the fourth e-Learning Centre for the KP Police; and the 56th established for other law enforcement agencies in Pakistan by UNODC, says a press release.

The DIG Training KP Police on this occasion lauded UNODC’s efforts to introduce ‘e-Learning’  as a modern and innovative method of delivering training to law enforcement personnel on over a hundred topics covering the prevention, detection, and investigation of crimes.  He said, “e-Learning is a great initiative of UNODC to address the contemporary law enforcement capacity building and training needs in the context that KP has passed through multidimensional internal security challenges including terrorism, with devastating effect to the lives and liberties of the people of the province. These challenges necessitated the police to be equipped with the latest in modern investigation equipment, knowledge, and methods to effectively counter the menace of crime and terrorism”.

Syed Fida Hussain Shah further elaborated, that the KP Police had established several specialized police training schools to meet those challenges; with adaptation of the latest training curricula, and upgradation of the training institutes’ entire infrastructure. “UNODC’s contribution of establishing four eLearning centres at KP’s police training institutes, including the Swat Regional Police Training Centre, will help police officers expand their knowledge in the required areas of law enforcement, and maximize their capabilities beyond traditional policing, for better service delivery to the public,” he further remarked.

UNODC Country Representative Mr. Cesar Guedes stated that another milestone in the long history of UNODC efforts had been achieved with the opening of the 56th law enforcement eLearning Centre at the Regional Police Training Centre in Swat. He said that UNODC’s eLearning curricula had been designed for delivery to the trainees as part of their basic, advanced, promotional, and refresher training courses being organized at the Police Training Centre Swat. He added that, “eLearning centres established across four locations at KP Police training institutions have together accomplished the imparting of training to over 5,000 police personal on core policing and law enforcement functions, whilst addressing their performance gaps and optimizing their intellectual capacity”.

Highlighting the achievements made under UNODC’s PACT (Pakistan’s Action to Counter Terrorism) Programme, aimed at the strengthening of prevention, investigation, and prosecution capacity in terrorism related cases, with special reference to KP, the UNODC representative noted that specialized training modules on counter terrorism investigation, explosives handling, intelligence, and information technology (IT) were being developed by UNODC to be integrated into the police training curricula at all specialized training schools of the KP Police.

Mr Cesar Guedes elaborated that under the programme several training workshops had been organized by UNODC for the KP Police and Prosecution Departments on the subjects of Witness Protection, Threat Assessment, and Proactive Approaches to Counter Terrorism, to raise the capacity of their work forces against emerging terrorism-related challenges.  “Our efforts will improve the inter-agency and inter-provincial coordination among Pakistani law enforcement agencies in countering serious crimes and terrorism,  and will promote human rights-compliant judicial processes as well. These achievements encourage us to explore further opportunities for cooperation with the Government of Pakistan in related areas under UNODC’s mandates including criminal justice, and controlling drugs and organized crime,” he stated further.