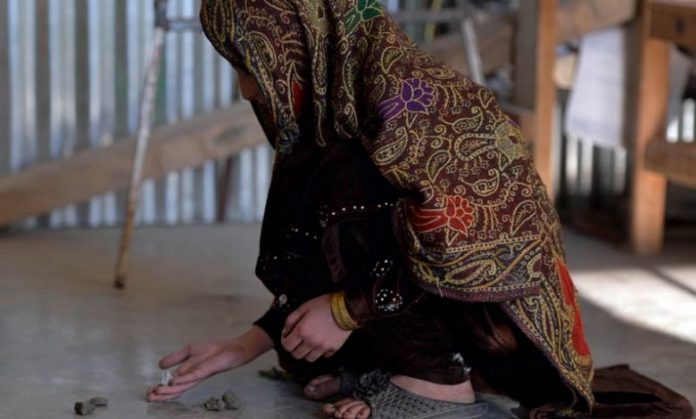 PESHAWAR: Safina Bibi is mother of two young daughters at the age of 20. She was 14 years old when she got married to her maternal cousin.

“I was too young back then and even did not know what was happening to me,” Safina now reminiscences. Soon after her wedding, she discovered that her husband was a drug addict and he also started beating her.

The violence and abuse from her husband forced Safina to go back to her parents’ home.  After sometime, her in-laws visited her and persuaded her to return. After her return, Safina’s husband behaved for some time, but his old vicious self again reemerged and the beatings and violence again started.

“I lost all interest and just wished to see my life to come to an end,” Safina told TNN, adding that then whenever she thought of dying, her daughters came in her mind.

She ended up felling on tranquilizers due to crises of her martial life that further deteriorated her health. She finally again returned to her parents where she is living with her two daughters as her abusive husband has decided to divorce her.

According to a World Health Organization’s report about 17 million Pakistanis are suffering from psychological problems. A research study shows about 46 per cent of women from Khyber Pakhtunkhwa were suffering from mental illnesses. Psychiatrists are of the view that these mental issues further aggravate due to lack of treatment.

Clinical psychologist Dr Arshi Arbab who has been treating patients for past 11 years said that many of the Pakistani girls are married off at early age, which adversely affects their physical and mental health. “When a female is married off at tender age then she has to take care of an entire house including husband, his parents and other in-laws,” Dr Arbab said. She said that so many responsibilities deprive the girls of their childhood.

She said most of females visiting her for treatment are suffering from anxiety, depression, fear and other psychological conditions and most of them are married off in young age. She said that most of people even did not get treated for psychological problems, which further exacerbates the problems. “Many of such girls often commit suicide or ran away from home and are killed in the name of honor when they are brought back home,” Dr Arbab said.

A colonial era Child Marriages Restraint Act 1929 is still in force in Khyber Pakhtunkhwa to address the issue of child and early age marriages. The legislation provides for a month long detention and Rs 1000 fine for those facilitating marriages of boys younger than 18 years and girls below 16 years. Though there have efforts to make improvements in child marriages legislation; however, all such efforts have fallen flat due to opposition from hardliners. The religious hardliners are opposing increasing girls’ age of marriage from 16 to 18 years.

Clinical psychologist Dr Arshi Arbab said that there were many reasons for early age marriages including poverty, sexual abuse, early age promises to marry children and exchange marriages. She said in some areas, people even take money for marrying off their daughter, which benefits them financially.

She said that girls married at the young age are neither given money by their husbands nor the parents. Besides they are also not allowed to go anywhere and they are made to work dawn till dusk. “This is main reason for young bridges getting depression,” she said. She said that these girls also face great trouble in child birth and one of the reasons for increasing rate of maternal deaths during childbirth was early age marriages.

Is there a way out?

Meanwhile, Safina while staying at her parents’ home has enrolled at a private school to complete her matriculation. She knows she also has  to take care of her two daughters.

“Government should immediately enact a legislation to outlaw early age marriages so lives of other innocent girls are saved,” she added.