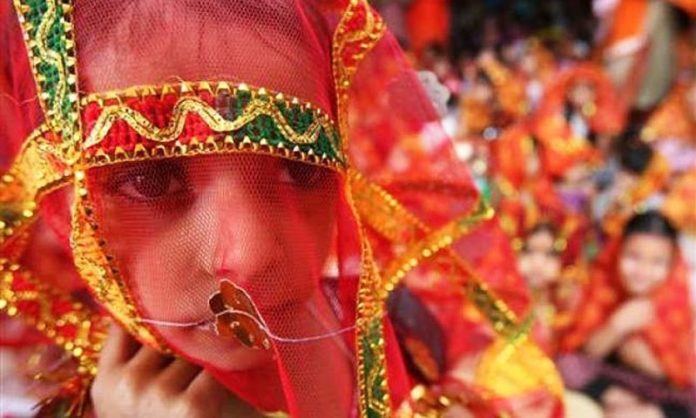 PESHAWAR: Sehrish was going to play with her friends on the roof of her house when she was stopped by her mother asking her to come and sit inside a room, as it was inappropriate for her to play on her Nikah (marriage) day.

The 14-year-old did not know at that time that she was about to be tied in such a ‘responsibility’ from which she would not be able to play again with her friends or do other things which normal children do. She was not expected to behave as a bride and act ‘responsibly’. Women around her were talking about marriage responsibilities, but she was unable to understand much due to young age.

It was decided that Rukhsati (wedding reception) would be held one year after Nikah which passed by within no time and now Sehrish became a housewife after marrying a man 10 years older than her. So she suddenly became a woman from a teenage girl and adopted all responsibilities of the in-laws’ family. She already had three children when she reached the age of 20. In the process, she lost her physical and mental health and became so weak that she looks much older than her actual age.

Sehrish is now 35, but she looks like 50-year-old woman and frequently visits different doctors for consultation regarding her health condition. Mothers who believe that they can quickly fulfil their responsibility by marrying off their daughters in such a young age must realise that this always proves counterproductive in shape of physical and mental health perils for the girls. There are thousands of girls like Sehrish who are deprived of their childhood by their parents in rush for marrying them off, and their lives are ruined as a consequence of overburdening the innocent soul physically and emotionally.

In Khyber Pakhtunkhwa, the British-era law of 1929, Child Marriage Restraint Law, is still in practice which provides for one-month imprisonment and Rs1,000 find on facilitating marriage of boys below the age of 18 years and girls below 16 years of age. Several attempts were made in the past to improve this law, but conservative elements within and outside the successive governments impede this development. The rights activists are mainly campaigning for increasing the minimum marriage age for girls from 16 to 18 years.

The Council of Islamic Ideology (CII) has sent its recommendations to the Ministry of Law according to which child marriages must be discouraged through awareness campaign. The CII said although it doesn’t support increase in minimum age limit for marriage, but administrative steps must be taken to discourage early marriages. It said identity cards of the bride and groom must be available at time of solemnisation of marriage.

Qamar Naseem, Program Coordinator Blue Veins, said the menace of early marriages needs to be discouraged and women must be empowered to create a healthy society. He said religious scholars can play a crucial role in this regard. He said the KP government is holding wide-ranging consultation to improve law regarding early marriages.