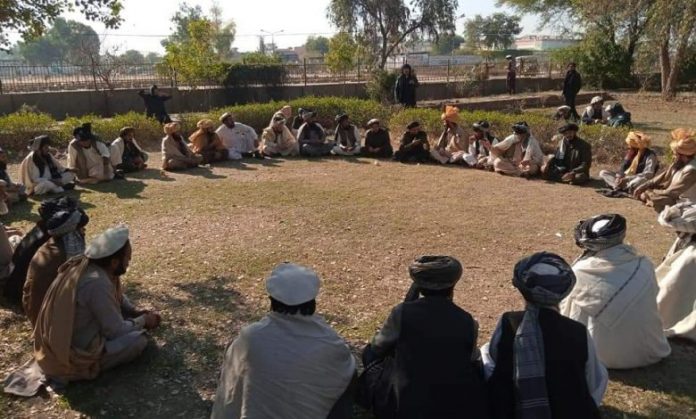 The demands were made at a Jirga of elders of Madakhel tribe on Monday. Participants of the Jirga said the affected people of Serai Darpakhel have not been compensated for their damages.

Tribal elders Malik Nasrullah Khan, Malik Jalal Khan, Malik Rehmatullah Khan, Malik Sharoop Khan, Malik Masood Khan and others addressed the Jirga. They said the area inhabited by Darpakhel tribe was also affected during the military operation like rest of North Waziristan. They said their area is backward as no development work has been carried out. They said it is a matter of grave concern that while the people of rest of North Waziristan are receiving compensation for damages, even the assessment of damages in Serai Darpakhel has not been made so far. They said people of the area suffered massive damages, adding that depriving them from compensation tantamount to discriminatory treatment.

The Jirga members demanded the government to make arrangements for return of displaced people of North Waziristan in Afghanistan without further delay. They said they will be compelled to launch a protest movement and long march towards Islamabad if the government kept on ignoring their genuine demands.

The tribal elders said a grand Jirga of all sub-tribes of Madakhel tribe will be convened soon during which the future strategy will be chalked out. They said they would not rest until the government accepts their demands.