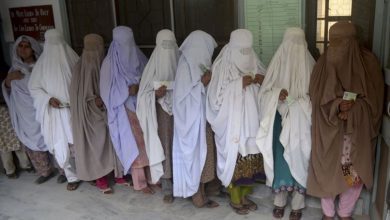 PESHAWAR: Around one million women out of 2.5 million total voters in tribal districts will poll their votes in general elections 2018 scheduled to be held on July 25.

In last general election in 2013, ratio of women’ votes was unsatisfactory but this time the Election Commission has made special arrangements to ensure more and more women could vote.

Tribal News Network has talked to people in seven tribal district to know what they think about importance of women votes. Dost Muhammad Khan, a voter from North Waziristan, said that committees have been formed that hold meetings with people to convince them to send women for casting their votes.

“Even educated women throughout the district have been visiting each and every house to create awareness among fellow women regarding importance of vote,” he said.

Gul Afzal, a candidate contesting election from Bajaur, said that there was no facilities provided to women voters in women polling stations like water, chairs and bathrooms due to which women turn out remained very low. “The more you facilitate women, the more they would come out and poll their votes,” said Afzal.

He advised the ECP to make proper arrangements for women at the polling stations if it wanted more women to poll their votes and warned that women would not show up if this time they were not facilitated.

Similarly, Samina Bibi, a teacher in Orakzai district also complained of shortage of facilities at polling statiosn during last general elections due to which women were reluctant to poll their votes.

She told TNN that women knew importance of their vote and they wanted to cast their vote. “You can win or lose with just one vote therefore for candidates each vote, no matter if the voter is a man or a woman, is very important,” she said.

Malik Waris Khan, a resident of Khyber district, agreed with Gul Afzal and said that ECP has to play its due to role to ensure women could vote.

“Women in my family are educated and educate other women in our neighbourhood how to vote,” he said, adding that he has urged women of his family to teach women in their village how to vote so that to save their time and vote.

He went on to say that no one want to bar their women from polling their vote if they are facilitated.

“Women in tribal districts are now aware of the power of their vote and they know their vote can bring a positive change,” she said while talking to TNN.

Similarly, Hamid Hussain, a resident of Kurram district said that if women were not allowed to vote on their own will then their vote would be significant, adding that in most cases they ask polling agents to poll their votes, for they don’t know how to cast their vote.

He added that most of women didn’t know about parties’ manifesto and cast their vote to candidates supported by their fathers, brothers or husbands.