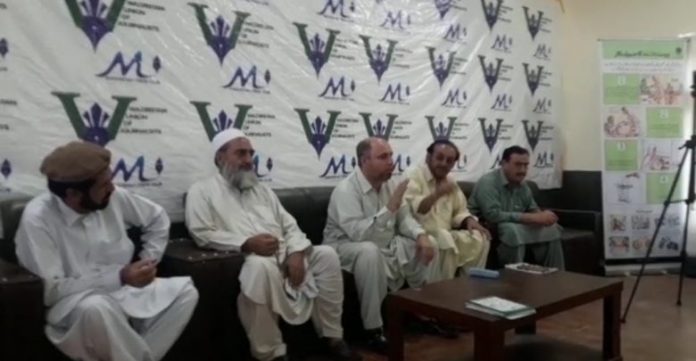 MIRANSHAH: A function was held in Miranshah, the main town in North Waziristan tribal district, on Wednesday to mark the importance of women’s participation in the elections.

District Returning Officer (DRO) Abdul Qayyum Shinwari, District Election Commissioner (DEC) Rafique Marwat and other people belonging to different walks of life attended the meeting at Miranshah Press Club. During the meeting the participants discussed importance of women’s voting in the upcoming provincial elections in tribal districts on July 20, which are just two days away now.

DRO Abdul Qayyum Shinwari said during the meeting that the system of adult suffrage was introduced in tribal districts in 1997 and it is continuing since then. He said he is hopeful that more women will come to polling stations to cast their votes in North Waziristan. He said the use of vote must be done according to one’s own conscience and decision rather than depending on others. He said all male and female registered voters must exercise their right to vote to select their representatives.

DEC Rafique Marwat said on the occasion that no one can deny the importance of the vote in the election process. He urged the people of tribal districts to convince their mothers and sisters to exercise their right to vote and take part in building future of the area. He said female staff has been appointed at specific polling stations to facilitate the women voters.

Rafique Marwat said tribal culture and traditions will be fully protected and upheld while facilitating the female voters. He said efforts have been made to provide maximum facilities for women voters.

The DEC said all the arrangements have been finalised for provincial elections in tribal districts and CCTV cameras have been installed at all polling stations. He said the polling staff has been trained and material related to elections has also been dispatched to respective destinations.