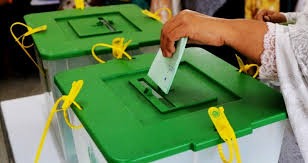 PESHAWAR: The Election Commission of Pakistan (ECP) has set up display centres at all the tribal districts for registration, correction or removal of Names from voters’ lists. The centre has been set up in Kurram, Bajaur, Mohmand, Orakzai, Khyber, North Waziristan, South Waziristan, FR Peshawar, Bannu, Kohat, Laki, Dera Ismail Khan and Tank where voters can register their votes.

The Commission also urged voters of the tribal districts to get their votes registered on their permanent or temporary addresses to become eligible to cast their votes in the upcoming Khyber Pakhtunkhwa assembly elections. These centres will remain open from 9 am to 5 pm. In this regard, the ECP has also issued special instructions to the provincial election commission. The final lists of all the registered voters will also be displayed at these centres.

Secretary Election Commission Babar Yaqoob while chairing a meeting, last Friday, directed the relevant officials to prepare electoral lists of all the tribal districts for upcoming elections on provincial seats in the area.

The ECP issued a draft list of constituencies on Wednesday last, notifying the share of tribal districts for the allocation of seats in the provincial assembly of the KP. A share of 16 seats for provincial assembly of Khyber Pakhtunkhwa has been allocated for all the eight tribal districts. The seats have been given in accordance with provisions of the Article 106 of the Constitution as amended vide 25th amendment and in the light of provisional results of the sixth population census of 2017 officially published on January 3, 2018, by the Pakistan Bureau of Statistics.