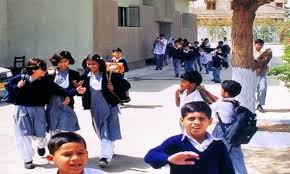 PESHAWAR, 15 December: The Khyber Pakhtunkhwa government has announced holiday in all the government and private educational institutions of Peshawar on Friday, 16 December, 2016, the second anniversary of terrorist attack on Army Public School and College Peshawar, in which over 140 students and teachers lost their lives.

According to a notification issued from the office of the deputy commissioner, all the government and private schools, colleges and universities will remain closed on Friday.

It said other government offices and institutions will remain open as per routine.