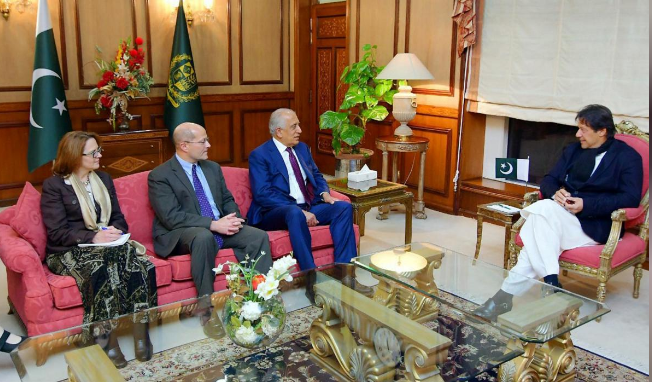 PESHAWAR: US peace envoy Zalmay Khalilzad has extended his stay in Pakistan despite completing talks with Pakistani officials in the hope of bringing Taliban to talks with a US delegation in Pakistan.

Zalmay Khalilzad was in Pakistan for three days as part of his efforts to hold talks with the Taliban to find a solution to 17-year long war. He met Pakistani top officials including Prime Minister Imran Khan and Chief of Army Staff (COAS) General Qamar Javed Bajwa.

On the other hand, the Taliban are demanding complete withdrawal of foreign troops from Afghanistan for the talks to progress. However, the US has never given any indication to fulfil this demand.

The US Senator Lindsay Graham was due to arrive in Islamabad on Sunday for talks on Pakistan’s role in stabilizing Afghanistan and ending the war through negotiations. It is believed that the US senator is coming with some offer to move forward the talks process.

The negotiating parties believe that the talks in Pakistan can help reduce tension between the Taliban and the US envoy developed in the recent days that negatively impacted the peace process.

The situation was aggravated with Khalilzad said in a statement in Kabul that the US will fight is the Taliban choose to do so. However, in his latter statements, he tried to bring down tension and said the US wants peace.

“To achieve peace, we are ready to address legitimate concerns of all Afghan sides in a process that ensures Afghan independence & sovereignty, and accounts for legitimate interests of regional states. Urgent that fighting ends. But pursuing peace still means we fight as needed,” Khalilzad wrote on his Twitter account.