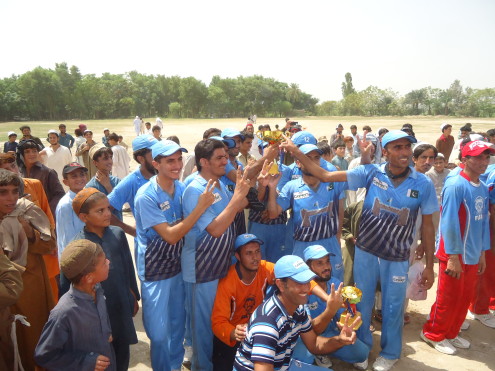 BANNU, August 21: An eight-day sports gala for the displaced people of North Waziristan has concluded in Bannu.

In the final event on 20 August, the P-Eleven Miranshah Cricket Team beat the Kajoori Club by six wickets. The last match of the gala was held in Dammi Pul Domail area.

Rhe Kajoori Club scored 64 runs, while gthe P-Eleven Miranshah Team chased down the target at a loss of three wickets in the 11th over.

P-Eleven’s captain Mr Shah Nawaz said, “The Sports Gala was held in order to alleviate the mental stress suffered by the displaced families of North Waziristan and to promote peace.”

Administrator and manager of the Sports Gala, Mr Noorullah, said that second phase of the gala would be more enjoyable and that it would play an important role to polish the talent of local players.