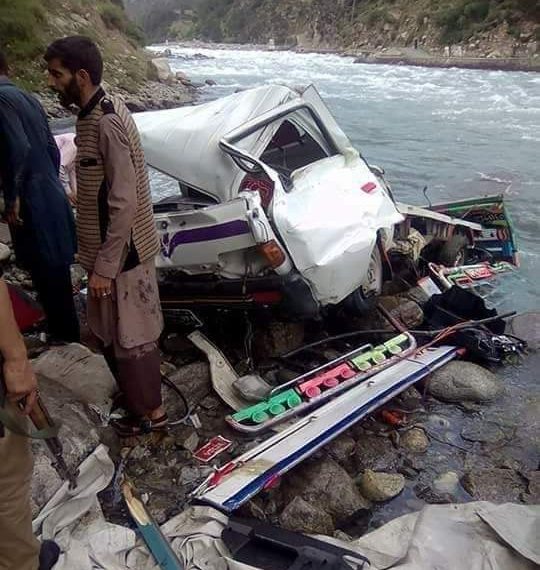 According to locals, the accident happened in Cham Garhi area of Kalam. No authentic information was available about the exact cause of the accident. Sources said the accident probably happened due to over speeding due to which the vehicle went out of driver’s control and fell into a deep ravine.

The people who lost their lives in the accident belonged to Buner, who had come to Swat for tour.

Several deaths occurred due to traffic accidents in different parts of Khyber Pakhtunkhwa during the Eid holidays. Most of these accidents occurred due to reckless driving, poor condition of roads and heavy traffic load on roads during Eid days.

A large number of people come out of their homes for tours in different parts of the country during Eid holidays which create a huge traffic mess at roads leading to tourist places. Several accidents also occur during these days.

Bajaur Police in a raid on a house recovered a huge quantity of hashish on Saturday.

On the instruction of District Police Officer (DPO) Pir Shahab Ali Shah, Bajaur Police raided a house in Salarzai area and recovered 24 kilograms hashish. Police had received information that hashish has been brought to Bajaur from Afghanistan and it could be smuggled to some other place anytime. A raid was conducted on a house during which hashish was recovered. Raids are continuing for the arrest of the alleged smugglers.

The DPO told journalists that the menace of drugs will be eliminated from Bajaur tribal district. He said police will take strict action against drug pushers. He said narcotics spoils the youth and destroys their future. He said the business of narcotics will never be tolerated in Bajaur. He said the raids of police against drug smugglers will continue.

Since the integration of Bajaur Levies and Khassadars in KP Police, it was first major raid by the Bajaur Police.