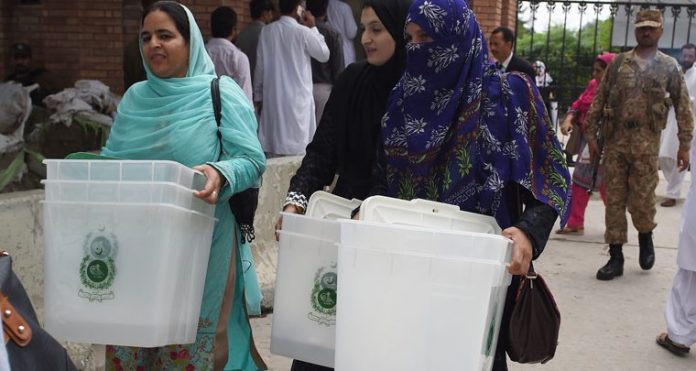 PESHAWAR: Electioneering is in full swing in tribal districts two days ahead of the crucial provincial polls, but candidates are finding it difficult to find female polling agents.

Candidates of different political parties and independents are even giving adverts on social media for female polling agents and they are offering good remuneration for this purpose.

Every election candidate must have male and female polling agents to identify the voters and help and guide them in voting. Polling agents of candidates keep an eye on the polling process and also remain present at the time of counting to avoid any conflict on voting results and to ensure transparency. At the end of the polling, the presiding officers first of all share the results with polling agents.

Haji Lali Shah, ANP candidate from PK-101, Bajaur, said while talking to TNN that just two days are remaining in the polls and he has no women polling agents in 60 percent polling stations. He said he is in contact with an NGO in Peshawar which will provide women polling agents to him and he will pay for their remuneration, travel, food and accommodation.

Malik Nadeem Zada, the PPP candidate from PK-105, Khyber also said that he is facing shortage of polling agents. He said he is searching educated polling agents in Peshawar.

Shah Hussain Shinwari, the ANP candidate from the same constituency, says 50 percent women polling agents will be available from his family, while the rest will be provided by his party from Peshawar. Shahid Shinwari, the PTI candidate from the constituency, said women from his party and Christian community will perform the role of polling agents for him.

Women polling agents were also brought to tribal districts in last general elections, but after the elections they complained that they did not get the agreed remuneration and other facilities.

Sudher Afridi, a journalist from Landikotal, said while talking to TNN that the main reason behind shortage of female polling agents is low literacy rate. He said women often cannot do such jobs in merged districts due to cultural issues. Candidates having money and influence easily overcome the problem of women polling agents, while others face difficulties.