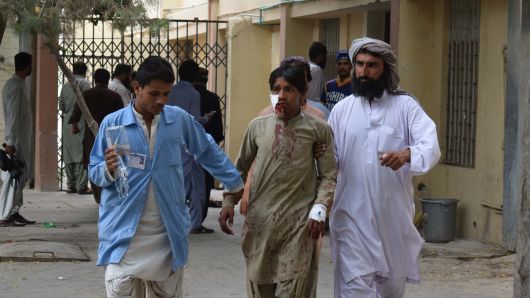 PESHAWAR: The convoys of election candidates in Lower Dir and Lakki Marwat have come under gun attack; however, no life loss was reported in both the incidents.

In Lower Dir, a firing incident on the convoy of the Jamaat-e-Islami (JI) leaders Sirajul Haq and Aizazul Mulk Ifkari was reported on Friday night. Aizazul Mulk, who is contesting election from PK-16, has alleged that his rival candidate from the Awami National Party (ANP) Haji Bahadur Khan was involved in the firing incident.

Mr Ifkari said while addressing a press conference that the incident happened due to negligence of Jandol Police. He demanded transfer of the local deputy superintendent of police (DSP) and appropriate action by the Election Commission of Pakistan (ECP) in this regard. He has lodged a complaint against Haji Bahadur Khan in the local police station.

Haji Bahadur Khan vehemently rejected the allegations of Mr Ifkari and alleged that the JI activists opened fire on his house and also pelted stones. He has also filed an application with the police against the JI leaders.

Meanwhile, Malik Riaz, an independent candidate from Lakki Marwat, has alleged that his convoy was attacked by his political rivals.

He said he was going for an election rally in Bargi area on Saturday morning when armed men opened fire on him. However, he said he luckily escaped unhurt. He also alleged that the armed men forcibly stopped his vehicle, snatched Rs50,000 cash from him and asked him to withdraw from election. He alleged that his rival candidate from the MMA is pressurising him to withdraw from elections.

The incidents of terror attacks and violence in the election rallies have raised concerns over the security situation ahead of the upcoming general elections scheduled to be held on 25 July.