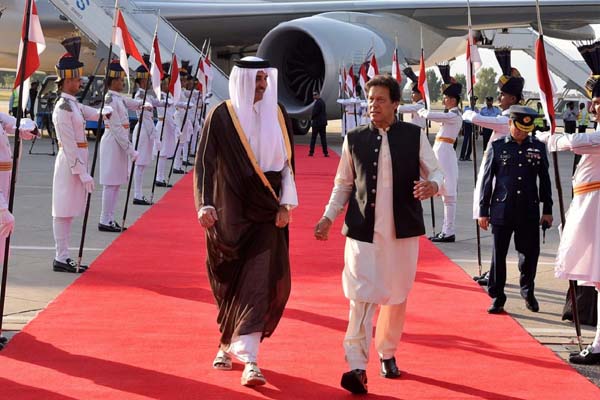 PESHAWAR: Emir of Qatar Sheikh Tamim bin Hamad Al Thani on Saturday arrived on a two-day visit to Islamabad on the invitation of the Prime Minister Imran Khan.

The Emir was received by PM Imran Khan and Foreign Minister Shah Mahmood Qureshi on Nur Khan Airbase. He was given a 21-gun salute at the Prime Minister house where he also viewed a flypast by JF-17 Thunder aircraft.

The Emir is accompanied by a delegation of key ministers and senior officials. During his visit, both the countries will hold talks with the Prime Minister and will have a meeting with the President.

Immediately after his arrival, both the countries signed three different memorandums of understandings (MoUs) to further enhance the mutual cooperation in areas of trade, business, tourism and investment.

The MoUs on the establishment of Pakistan and Qatar Joint Working Group (JWG) on trade and investment was signed by Finance Minister of State of Qatar Ali Shareef Al Emadi and Advisor on Commerce Abdul Razak Dawood.

Secretary-General of Qatar National Tourism Council Akbar Al Baker and Minister for Inter-Provincial Coordination Dr Fehmida Mirza signed the MoU for cooperation in the field of tourism and business events between Qatar and Pakistan.

The Emir of Qatar will be in Pakistan for two days during this time, he will hold talks on the bilateral relations with Prime Minister Imran Khan and President Arif Alvi. Sheikh Tamim bin Hamad Al Thani had earlier visited Pakistan in March 2015.