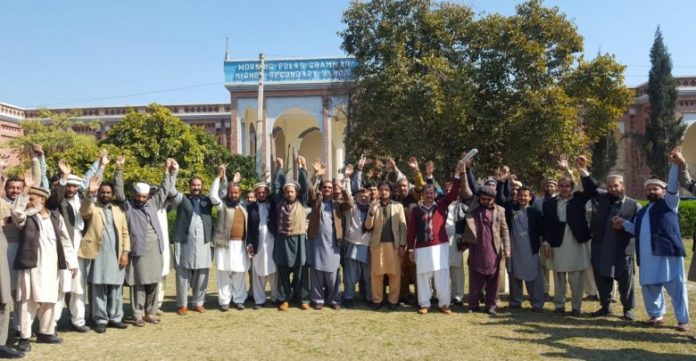 LAKKI MARWAT:  Like other parts of the province, the workers of working folks grammar school in Sara-e-Norang, Lakki Marwat staged a protest for their demand of regularization of their services on Friday. The call for strike was given by the all regular employees association of Worker Welfare Board (WWB) to all the teaching and non-teaching staff of the board.

The staff members were wearing black ribbons around their arms and refused to use the biometric system for their attendance at the schools. The president of the association Darpan Singh and general secretary Kamil Khan said that the high officials of the board have to accept all their rational demands as the court has also decided the case in workers favour.

They protested that the high officials of WWB are not interested to pay attention even to their rational demands and even the semi-official staff of the board, despite the completion of their legal term, have not been given promotion or increased in salaries. They lamented that despite the federal government order, there has been no up gradation in their grade.

The protesters maintained that the government has set up these institutions so that the children of the working class get a proper education, however, the “corrupt board officials” are creating hurdles in their way of getting the quality education.

The protestors said that clerical staff of the board has been given up gradation, however, the teaching staff has been kept deprived of their rights.  They warned that at present they have refused to use biometric attendance system in protests but their demands were not fulfilled, they will give a general call for strike and will surround all the WWB offices in the province.

The workers of WWB have also filed several writ petitions in the Peshawar High Court and were decided in their favour. On Wednesday, the court indicted its Chairman and secretary for failure to comply with the court order to appoint the principles of 23 schools within one month.