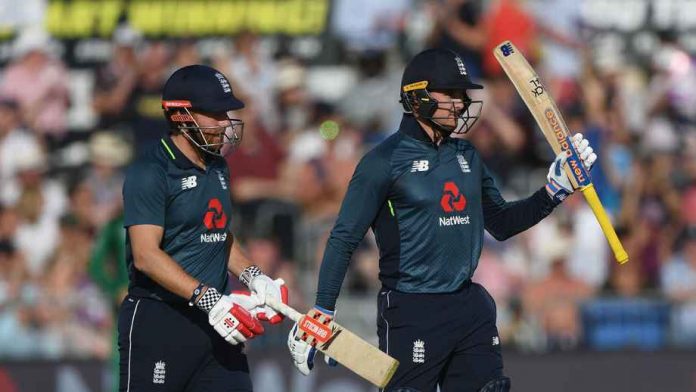 PESHAWAR: Sloppy fielding caused defeat for Pakistan in the third ODI against England at Bristol on Tuesday night despite scoring a mammoth total.

England put Pakistan into bat after winning the toss. Fakhar Zaman was out for 2 and Babar Azam scored 15, but Pakistan recovered well to post 358 runs in the allotted overs due to brilliant batting of Imam-ul-Haq and Asif Ali who scored 151 and 52 runs respectively. It was sixth ODI hundred for Imam. Haris Sohail was looking good on 41, but he also threw his wicket away due to sloppy running and was run-out.

It was an imposing total and Pakistan was in a good position to defend it, but England openers started well and hit Pakistani bowlers hard. Bairstow scored 128 runs, Jason Roy scored 76, Moeen Ali scored 46 and Joe Root scored 43 and they surpassed the target in 44.5 overs with six wickets to spare.

Bairstow was declared player of the match for his brilliant batting.

For Pakistan, Junaid Khan, Imad Wasim and Faheem Ashraf took one wicket each. All Pakistani bowlers went for plenty, but Shaheen Shah Afridi and Faheem Ashraf were particularly at the receiving end. The agony piled up as Pakistan started dropping simple catches and the England batsmen fully capitalised on that. Three simple catches were dropped and one catch fell just fell in front of Pakistani fielder (Haris Sohail) as he didn’t move forward to catch it in the hope that it will carry to him. Shaheen Shah Afridi and Babar Azam also dropped dollies which demoralised the bowling attack and England chased the mammoth total with ease. The result could have been different had Pakistan grabbed the opportunities.

Pakistan again left out Shoaib Malik and Mohammad Hafeez in the match as their replacements are doing well at the moment.

With Tuesday’s victory, England now lead the five match series 2-0 and Pakistan will have to win the remaining two matches to save the series. The next match of the series will be played at Nottingham on 17 May.