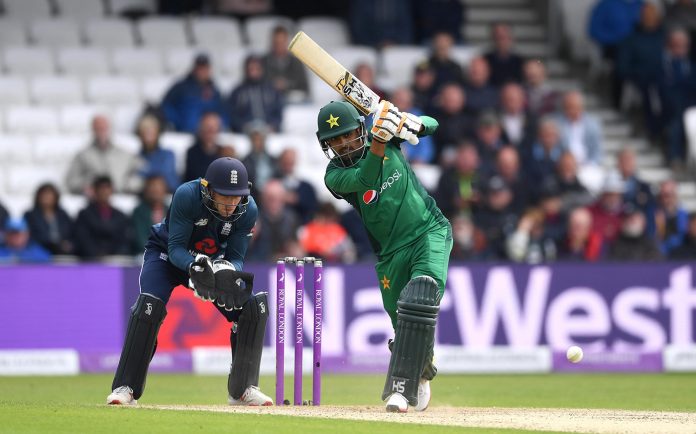 PESHAWAR: England completed 4-0 sweep in the five-match ODI series against Pakistan by defeating the visitors by 54 runs in the last match of the series at Leeds on Sunday.

England decided to bat first after winning the toss and amassed 351 runs for the loss of nine wickets. Joe Root was the pick of batsmen for England who scored 84 runs, while captain Eoin Morgan scored 76 runs. Jos Buttler, James Vince and Jonny Bairstow also contributed with 34, 33 and 32, respectively. There was no centurion in England innings, but still they reached a mammoth total.

Pakistan got to an extremely poor start and lost first three wickets for 6 runs. To make things worse, Abid Ali’s review for an LBW decision was wasted, while Mohammad Hafeez did not opt for a review when he was given out LBW by the umpire, while the replays suggested that the ball was missing the stumps. Then came Babar Azam and skipper Sarfraz Ahmed who played with responsibility and contributed 80 and 97 respectively. They could have gone further, but both fell victim to silly run-outs. And after that the rest of batsmen came and went back without much contribution and all batsmen were out for 297 in the 47th over.

After conceding two consecutive ODI series clean-sweeps, first against Australia and the second now against England, Pakistan will have to ponder a lot on fielding the best combination in the World Cup. The batting played well, but it will be bowling which will keep Pakistan thinking about various combinations. Shadab Khan’s return will boost the team in the mega event, while Pakistan will also be keen to include Mohammad Aamir in the squad given his rich experience and good record in England.

Sarfraz said after the match that the preparation for the World Cup was not ideal. He said Pakistan’s batting is ready for the challenge. However, he said the bowling and fielding will have to improve.