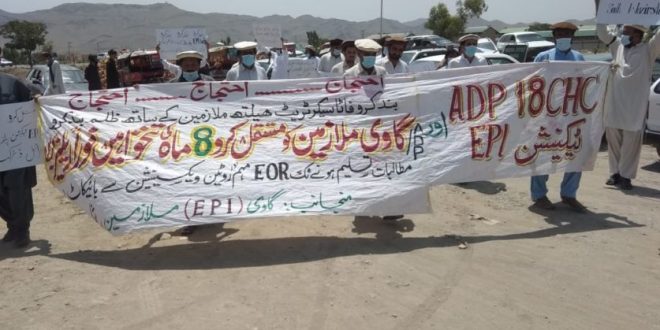 WANA: The employees of Expanded Program for Immunisation (EPI) project of the Health Department in South Waziristan tribal district on Wednesday staged protest demonstration against closure of their salaries and for regularisation of their services.

The EPI employees gathered outside the Wana Press Club who were also joined by activists of different political parties. They were holding banners and placards in favour of their demands.

The protesters said their salaries are not being paid for the last eight months due to which they are facing a lot of difficulties. They said they were appointed under the contract policy of 2002 in 2004 and 2006, but still they are deprived of regularisation. On the other hand, they said the contractual employees of Punjab, Sindh, Balochistan and Azad Kahsmir have been regularised.

The Awami National Party (ANP) provincial leader Ayaz Wazir, Jamaat-e-Islami (JI) leader Saifur Rehman and ANP’s Taj Wazir also attended the protest rally. The EPI president Ashfaq Wazir said the employees of tribal districts were not regularised, while the rest of the country were regularised. He said this injustice with the employees of the EPI is very unfortunate. He said the court has ordered regularisation of the employees, while the government is reluctant to comply with the order. He said that due to this discriminatory treatment, the EPI employees have decided to boycott the routine and polio vaccination until their demands are fulfilled.

Ayaz Wazir, Saifur Rehman and Taj Wazir said while addressing the protesters that the local elected representatives are not aware of the problems faced by the local people. They said the EPI employees are protesting for the last many days, but the local members of the National Assembly and Khyber Pakhtunkhwa Assembly have not raised the issue in any legislature.