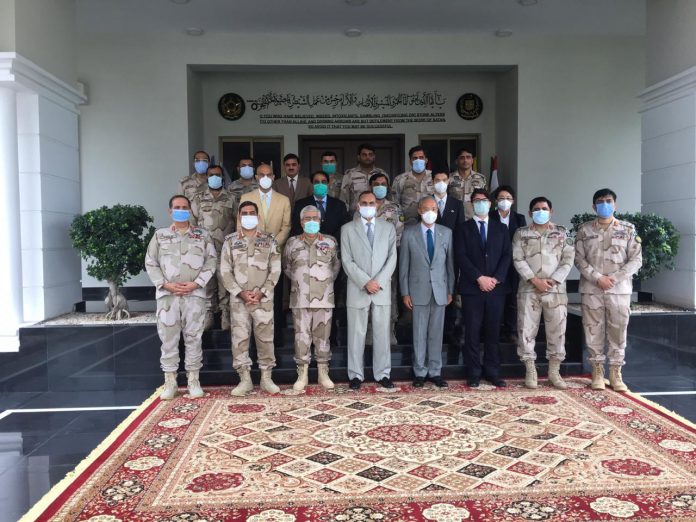 PESHAWAR: As part of sequential significant support by the Government of Japan for Pakistan to contribute the promotion of peace and stability in Pakistan and Afghanistan region, Matsuda Kuninori, Ambassador of Japan to Pakistan, and  Jeremy Milsom, the United Nations Office on Drugs and Crime (UNODC) Country Office Representative in Pakistan, handed over equipment for the Precursor Information Management System (PIMS) and Networking Equipment to Anti Narcotics Force (ANF) at the handing-over ceremony held at the ANF Headquarters, Rawalpindi on Wednesday.

The procurement of this equipment was one of the agreed deliverables under the Japanese-funded UNODC project worth $6.5 million to strengthen border security against illicit drug trafficking and related transnational organized crime. The equipment would be utilized to improve coordination between the Anti Narcotics Force (ANF) and other members of the Inter Agency Task Force (IATF) on Narcotics Control to achieve the purpose of the project.

Ambassador Matsuda commended hard efforts by the UNODC and ANF while highlighting the importance of the equipment to strengthen ANF’s capacity for effective interdiction and investigation of illicit drugs. He reiterates that Japan stands committed to helping Pakistan eradicate all types of transitional crimes, including drug trafficking which in any society hinders the socio-economic development and overall prosperity of the country.

He also noted that enhancing the border security between Pakistan and Afghanistan is crucial as the stability of the region is essential to the national security as well as economic and social development of Pakistan.  The ambassador continued that, for that purpose in 2016, the Japanese government provided necessary equipment for the strengthening border security against illicit drug trafficking and related transnational organized crime through UNDC. Moreover, the Government of Japan hosted a high-level meeting with the attendance of invited government officials both from Pakistan and Afghanistan in Tokyo on November 2019, to discuss the prevention of criminal activities such as drug trafficking in the border area and discussion also aimed for the promotion of trade between Pakistan and Afghanistan. Supporting Pakistan’s drug countermeasures would also help resolve the issues of terrorist financing and money laundering, which are being discussed in the FATF.

The ambassador hoped that projects like these will further strengthen the existing good relations between Japan and Pakistan.