PESHAWAR, 5 August: The eunuchs in Peshawar have decided to move the court after failure of the government to take action against officials of the Lady Reading Hospital (LRH) responsible for death of eunuch Aleesha during treatment at the hospital.

The eunuchs joined by human rights activities staged a protest at the hospital against the attitude of the hospital’s administration on Thursday evening. On the occasion, they also lit candles for the deceased Aleesha, who was brought to LRH in injured condition, but died after not getting proper treatment.

The protesters said the hospital’s Chairman Nowsherwan Barki and other staff responsible for negligence during Aleesha’s treatment avoided punishment due to political interference into the issue. 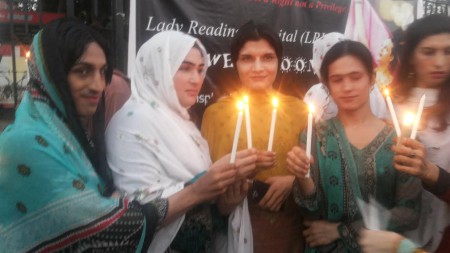 A eunuch, who identified himself as Chocolate, told TNN that the LRH chairman should resign as he is equally responsible for Aleesha’s death.

“The hospital’s administration was not willing to provide treatment to Aleesha in the men’s ward or the women’s ward which caused our friend’s death,” Chocolate said.

The protesting eunuchs and human rights activists said they will approach the court if action was not taken against the hospital’s director and board of governors chairman.