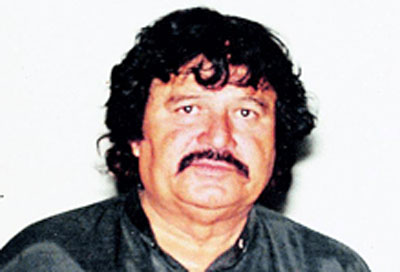 MARDAN/PESHAWAR,  October 11: Mr Badar Munir is a household name when it comes to the Pashto film industry. The 6th death anniversary of legendary actor was observed today.

Despite passage of several years after his death, the legendary Munir is still living in the hearts of Pakhtuns. He rendered invaluable services for the Pashto language and culture.

Belonging to Miankhel tribe, Badar Munir was born in 1943 in Shagram village, Swat district. He died on 11 October, 2008 in Lahore (Punjab province) at the age of 70. His father Maulvi Yaqut was a prayer leader of a village mosque.

Mr Munir was the first Pashto film star who performed in more than 600 movies, of which 85 were in Urdu, 31 Punjabi, 11 Sindhi and one in Hindko language.

“Badar Munir was not only a good movie star but also a social worker. He used to collect donations whenever floods would hit areas in Punjab province. He had performed in about 700 films. Besides Pashto, Urdu, Punjabi and Seraiki movies, he had also performed in an English film,” said Mr Baghdadi.

A known radio host, Mr Ali Yousafzai, told TNN, “I still remember that people would flock to the cinema whenever there would be Badar Munir’s movie.”

Before joining films, Badar Munir used to work as a driver a Karachi, a city of Sindh province considered to be business hub of Pakistan.

He was introduced to the film industry by famous Urdu film star Mr Waheed Murad (late) in 1970.

“Yousaf Khan Ao Sherbano” was his first movie, with Yasmin Khan as heroine. The story of the movie, based on the famous Pashto folk story of Mr Yousuf Khan and Ms Sherbano, was written by Mr Ali Haider Joshi, a famous Pashto poet.

Moreover, he was also cast as main hero in a number of Punjabi movies, including “Chor” (1977) and “Haibat Khan”, which were considered the hit movies.

“Lewnay”, released in the year 2007, was the last movie of the big screen legend. He left behind two widows, five daughters and five sons, in addition to a rich legacy of over 600 films.

TNN correspondent Mr Ajmal Shah in Mardan and Editor Online Mr Muhammad Shahid in Peshawar have contributed to this report.