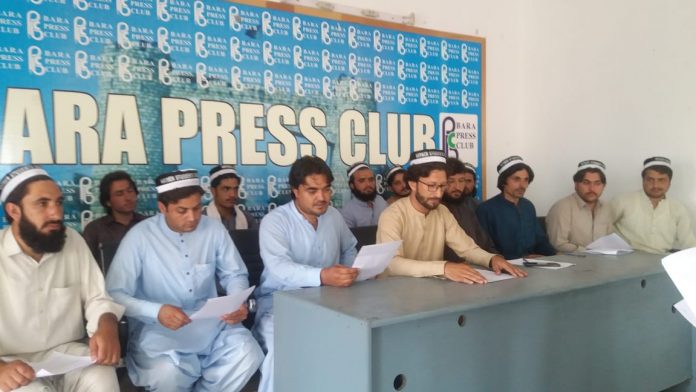 BARA: A total of 1,932 male and 124 female students have passed matriculation exam in Bara sub-division of Khyber tribal district this year, but the only degree college in Bara in Kohe Sher Haider has only 320 seats for intermediate students on which over 1,600 candidates have applied for admission.

The Khyber Students Union president Arif Afridi along with other office-bearers of the union said while addressing a press conference at Bara Press Club on Friday that the Government Degree College Kohe Sher Haider faces shortage of teaching staff as there are only 20 teachers in the college. He said there are only 14 classrooms for over 1,700 students in the college due to which the students and college staff face difficulties. He said more teachers must be appointed in the college and more class rooms must be constructed to facilitate the students. He said science laboratory and internet facility must also be provided in the college on priority basis.

Arif Afridi said second shift classes must be introduced in the Bara College to facilitate more students who remain deprived of admissions in first shift. He said the government, which has come to power with a slogan of change, must focus on saving the future of tribal students. He said a large number of students in Bara remain deprived of admissions due to limited number of seats in the degree college.

The students’ union president demanded the government to introduce four-year BS programmes in the college. He said all facilities must be provided in the college in order to enable the students to get quality education in their own area.

Arif Afridi said there are four senators, two MPAs and two MNAs belong to Khyber district and one MNA is a federal minister while another is a parliamentary secretary, who must pay attention to the shortage of facilities for students. He said there is only one degree college in Bara which is a matter of grave concern.

During the press conference, the union members demanded the government to upgrade the high schools in Shalobar, Alamgoodar and Akakhel to higher secondary level to accommodate the local matric passed students to take admissions in intermediate level.