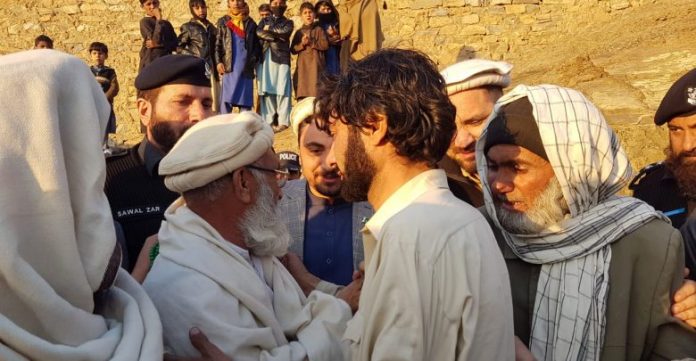 LANDIKOTAL: With the efforts of local lawmakers and district administration, two rival groups in the remote Loe Shalman area of Landikotal tehsil in Khyber tribal district have decided to end enmity and live with peace in future.

The families of Yar Badshah Shalmani and Kashar Gul Shalmani were in enmity for the last 30 years and injuries happened in both sides in several clashes. The people of the area were quite concerned over the situation and they were demanding the administration to intervene to stop both families from bloodshed.

Member KP Assembly Shafiq Sher Afridi, Assistant Commissioner Landikotal Muhammad Imran and local DSPs Jamshed Shalmani and Swalzar Khan Afridi played main role in making the rival families forgive each other and live peacefully in future. These leaders and officers along with other area elders were present on the occasion of the Jirga during which members from rival families hugged each other and vowed to work together for building peace in the area in future.

A tribal elder said on the occasion that every hujra (male guest house) of merged districts is like a centre for resolution of disputes. He hailed the traditional Jirga system where disputes can be resolved easily with the consent of all parties to dispute.

About two dozen measles cases have been reported in North Waziristan tribal district and Bannu which has created concerns among the people of the area.

Expanded Programme for Immunisation (EPI) Coordinator Dr Ashraf Younas said special teams are sent to areas immediately from where cases of measles, diphtheria and other diseases are reported. He said the cause of the spread of measles is that some parents don’t take their children to health centres for completing vaccination course. He said parents need to take more responsibility and make sure that their children get every vaccine on stipulated time. He said EPI teams are on duty in rural and urban areas of Bannu and if parents don’t find them then they can contact the nearby health centres.