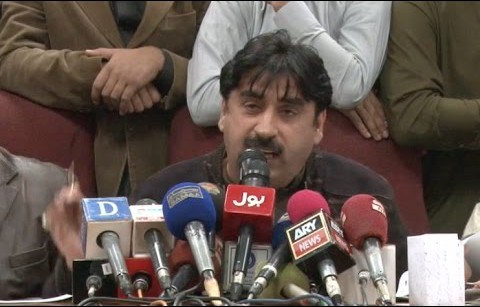 PESHAWAR, 19 March: Former provincial minister and member of the Khyber Pakhtunkhwa Assembly Ziaullah Afridi has asked speaker Asad Qaiser to resign from his office over allegations of corruption and misuse of power.

“Following charges of corruption on speaker Asad Qaiser, he has lost the moral grounds to hold a constitutional office. It is therefore required that he should immediately step down and face the charges,” Ziaullah told a news conference in Peshawar press club on Sunday.

He added that it is a also test case for PTI chairman Imran Khan whether he follows merit.

“When I was arrested by the Khyber Pakhtunkhwa Ehtesab Commission on corruption charges, party chairman Imran Khan terminated my basic membership. Now Khan needs to stand by his principles and ask Asad Qaiser to resign from the office until he is cleared by the NAB,” Ziaullah urged.

It merits a mention here that reports surfaced in media a couple of days ago that the National Accountability Bureau (NAB) KP had written a letter to the chairman seeking permission of initiating an inquiry against Asad Qaiser for his alleged corruption.

The media reports had alleged Qaiser that he has purchased 35 kanals of land in Bani Gala, Islamabad. The reports further alleged that he had been living in a house worth Rs350 million.

He was also accused of illegally appointing 80 individuals in the Assembly secretariat.

Asad Qaiser has rejected all the allegations during his news conference in Islamabad along with Khyber Pakhtunkhwa Chief Minister Pervez Khattak and vowed to take legal action against those who publish and broadcast fabricated news against him.