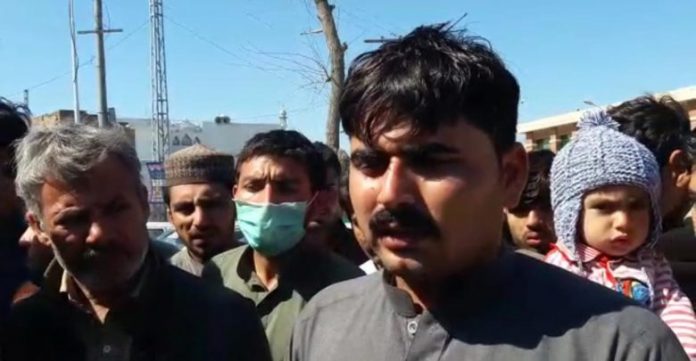 CHARSADDA: The family of a man who died in Prang police custody has accused the SHO of the police station for shooting him killed after he refused to pay a bribe of Rs 1 million.

Kashif’s brother Kamil, during a protest, alleged the SHO of Prang Police Station Arif Khan was asking for Rs 1 million, however, Kashif has refused to entertain his unlawful demand. Kamil further said that the SHO has arrested his brother on the pretext of an investigation into a murder case and was shot killed inside the police station with an official pistol.

However, Police official rejected his allegations and said that Kashif was arrested as part of an investigation into the murder of a trader Zia Ullah, who was killed two days back on the motorway, near Charsadda interchange. Police believed that the arrest was important, as Kashif was working with the traders at his store. However, the family was later on informed that Kashif has shot himself killed by snatching pistol from an official of the police station.

The Inspector general of Police Khyber Pakhtunkhwa Dr Muhammad Naeem Khan has taken notice of the murder inside police station during custody. The IGP has directed the Deputy Inspector General of Police, Mardan region to appoint a judicial inquiry to investigate the case and submit the report to the IGP office.  On the order of the District Police Officer Charsadda, the SHO, Mohrar and investigation officer of Prang police station have been suspended.

However, Kashifs’ has asked the government to hold the SHO Arif Khan accountable and register a murder case against him. Kamil said that there is no one to hear his appeal and register the FIR against the SHO. He warned that the family has no option but to hold protests against the police and Khyber Pakhtunkhwa government if justice was not ensured to the bereaved family.