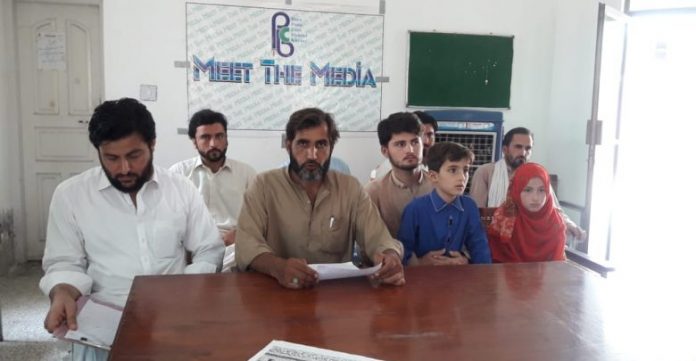 BARA: The relatives of slain journalist Hidayat Shah Afridi, who was a member of Bara Press Club in Khyber tribal district, have alleged that the murderers have the backing of influential people due to which they still roam freely in the area.

Addressing a press conference at Bara Press Club on Thursday, the family members of Hidayat Shah Afridi alleged that five Afghan refugees entered their house in Asad Town on July 04 and attacked Hidayat Shah and also hit him with bricks. They said Hidayat was critically injured in the attack. They said the journalist was being shifted to Hayatabad Medical Complex Peshawar, but he died on the way.

The relatives of the slain journalist said they have nominated five accused in the first information report (FIR), but only two accused have been arrested, while three killers are still roaming freely in the area as they have strong connections and police are also reluctant to arrest them.

The relatives said they have not received post mortem report yet and they feared that the report might be tampered. They demanded Khyber Pakhtunkhwa Governor Shah Farman, Chief Minister Mehmood Khan and Adviser on Information and Public Relations Ajmal Wazir to ensure that the post mortem report is provided to the family immediately so that that case could move forward in the light of facts.

The relatives also demanded the government to announce Shaheed Package for Hidayat Shah as he has left behind five daughters and two sons who need support and good education. They thanked the journalist community of Khyber tribal district for standing with them in this difficult hour.

The relatives demanded that the names of the remaining three accused must also be included in the FIR and they must be arrested immediately. They said the culprits involved in the murder must be brought to justice.

On July 04, Bara-based journalist Hidayat Shah Afridi was killed in a quarrel with Afghan refugees in Asad Town.

Initial reports said Hidayat Shah died of head injuries while being taken to hospital. He was reportedly hit by Afghan refugees in his head with bricks outside his house.