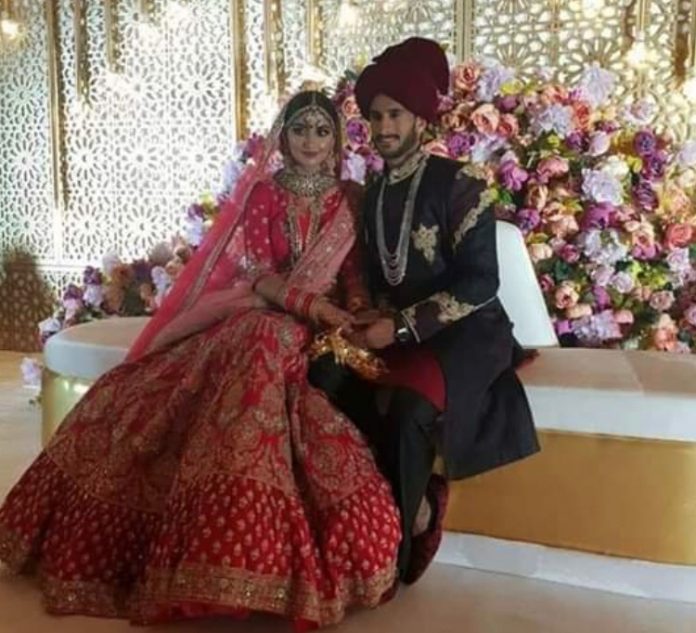 PESHAWAR: The national fast bowler Hassan Ali has tied the knot with Samiya Arzoo, an Indian national, in a glittering wedding ceremony today in Dubai and joins the ranks of Zaheer Abbas, Mohsin Hasan Khan and Shoaib Malik, all cricketers who took on an Indian partner.

Hasan was dressed in a tradition kurta while his male relatives and friends were seen wearing orange kurtas at the function. The event was also attended by his best friend and Pakistan national team spin bowler, Shadab Khan.

Before Nikah, yesterday, the couple was seen doing a pre-wedding photo shoot on the beach in Dubai. It was the first time, his fans have seen the couple together after he met Samiya on a dinner in Dubai a year ago. The photographs were shared by their official photographer for the event over the Instagram account.

In an official press conference, last month, Hassan Ali put a lot of misconceptions regarding his wife to rest. Such as his wife is called Samiya Arzoo and not Shamia as reported earlier. Moreover, Samiya hails from the Mewat district of Haryana, India and is currently living with her parents in Dubai. She studied Engineering in England and is currently serving as a Flight Engineer with Emirates Airlines.

Hassan Ali had announced that he will be wearing a Pakistani style red and black sherwani while Samiya Arzoo will be wearing an Indian dress. Hassan has also said that Samiya will live with his family in Gujranwala. He has earlier confirmed the news of getting married to an Indian girl on August 20 in Dubai saying, “news running in the media is true”.

The Pakistani pacer will not be a part of the pre-season camp in the first week on account of his wedding. Also, he will not be attending a scheduled fitness test on August 20.