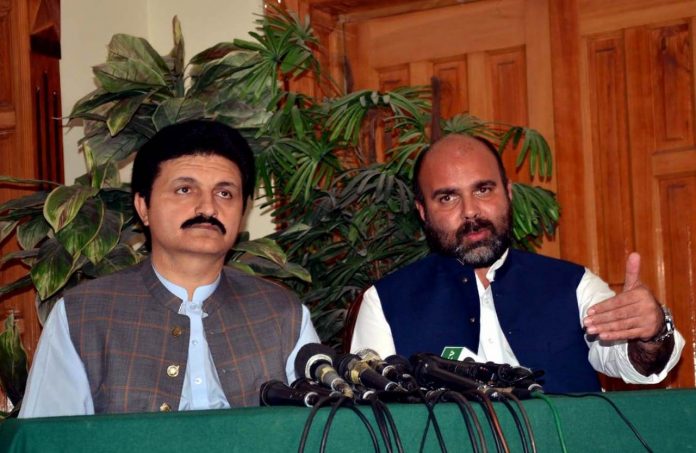 PESHAWAR: Khyber Pakhtunkhwa Finance Minister Taimur Salim Jahgra and KP government spokesman Ajmal Khan Wazir have said that the merger of erstwhile Fata with KP was the greatest event of the history after the merger of East and West Germany.

Addressing a joint press conference at Pakhtunkhwa House in  Islamabad on Monday, they said the commitment and dedication of the PTI made possible the shifting of responsibilities of 27 departments, abolition of Fata Secretariat, introduction and enforcement of the legal system of the rest of the country in tribal districts. They said unprecedented development and welfare schemes were made possible by the PTI government under the leadership of Prime Minister Imran Khan.

The provincial minister and spokesman said that during last few months, the PTI government has introduced independent monitoring system in education in the merged districts with the help of which absenteeism has been completely eradicated and now for the first time the students have been facilitated and the standard of education has been brought on a par with those of other parts of the country.

They pointed out that the merger was a great challenge and a gigantic task, but immediately after taking over, the PTI government took it upon itself and within a short span of six months, all the 27 departments were merged with the provincial departments. They said the merger of the Levies and Khassadars was not a simple task but they were not only taken over but upgraded to the level of modern police.

Ajmal Wazir and Taimur Jhagra said hospitals in tribal districts are monitored on daily basis and wherever any deficiency is noticed, it is addressed on urgent basis. They said the Sehat Insaf Cards scheme has been extended to the whole of the tribal population, while loans and financial assistances schemes are also introduced for the youth under the Insaf Rozgar Scheme without any discrimination.

They also said that in view of the topography and scarcity of energy resources in the merged districts, solarisation programme has been implemented throughout these districts and thus almost all mosques have already been provided solar energy.

They said that for the first time in the history of the country, a prime minister has visited six of the seven tribal districts in such a short span of time. The said KP Chief Minister Mehmood Khan and his cabinet members are continuously visiting each and every part of the merged districts so that the progress on these numerous welfare schemes is properly monitored and its timely execution ensured.