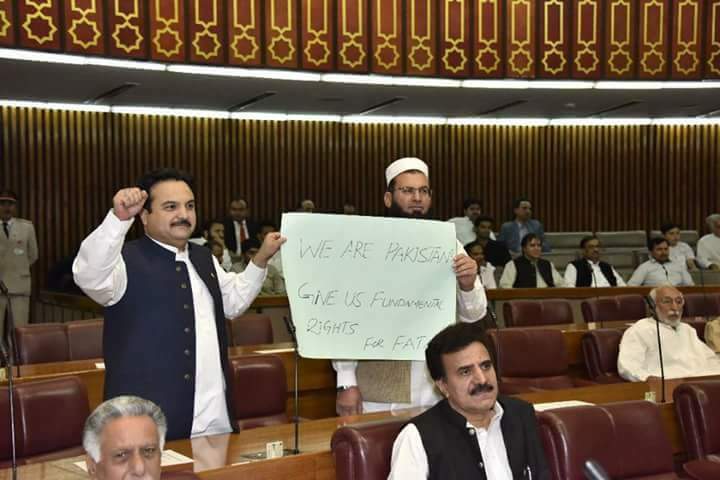 PESHAWAR, 2 June: The parliamentarians belonging to FATA staged a unique protest during the joint session of the Parliament on Thursday by holding placards in their hands reading that FATA people are also Pakistanis and they should be given their basic rights.

During the address of President Mamnoon Hussain to the Parliament, the FATA lawmakers were split into two groups as one group including Haji Nazeer Khan, Ghalib Khan, Bilal Rehman, Ghazi Gulab Jamal and Maulana Jamaluddin did not take part in the protest. Media reports said Al-Haaj Shah Jee Gul Afridi distributed posters inscribed with slogans against delay in implementation of reforms in FATA among members of different political parties before the start of the Parliament’s session. The opposition members joined FATA members Shah Jee, Hidayatullah, Momin Khan Afridi and Orangzeb Khan in their protest when the president started his address. However, other FATA members remained glued to their seats during the protest of other members.