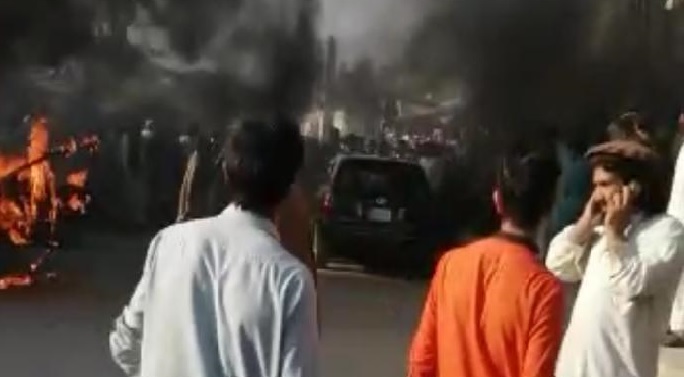 PARACHINAR: Father and his son were shot to death outside session court in Parachinar of ​​Kurram district after they were released on bail on Tuesday.

After the incident, hundreds of people come out on road and burned vehicles demanding the Khyber Pakhtunkhwa (KP) government to arrest the killers and provide justice to the bereaved family.

According to correspondent TNN, the incident took place in Parachinar today which resulted in the death of father and son on the spot. The correspondent reported that as per initial investigation, the deceased was accused of helping two girls who had an escape from their houses and married against the wishes of their families.  However, the police have not yet released any statement to inform the public about the reason behind the double murders.

Today, Abdul Rasheed and his father Fazal Rahim were released at Court Parachinar on bail, however, the time,  they come out of the court, unidentified persons were waiting for them and opened fire on them killing them both the spot. Sources said that after the incident, a mob of people torched three vehicles in Sadda and started protesting.

The protestors have demanded the government to take effective measures to restore peace and security in the area that was badly affected due to sectarian violence in the past. A large force of security forces reached the area to take control of the situation.

Deputy Commissioner Kurram Shah Fahad said that all efforts are being made to restore the peaceful situation in Sadda. He said that murders are the result of personal enmity between the two families. The DC said all the security forces and administration is taking effective measures to control the situation. The DC said that Jirga of local elders has also been called to work for a peaceful situation.

Member National Assembly (MNA) Sajid Tori has said that the tragic double murders are the result of personal enmity. The MNA said that it is very disappointing that the people of the area have taken the law into their hands to give the incident a colour of sectarian violence. Tori said that peace has been restored in the district after a lot of sacrifices by the people and security forces therefore, every possible care should be taken to avoid any unpleasant situation in the district.