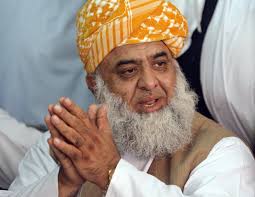 PESHAWAR, September 16: Jamiat Ulema-e-Islam-Fazal (JUI-F) central ameer Maulana Fazlur Rahman on Saturday rejected the idea of appointing chief operating officer. He said it would parallel body to Fata Secretariat and Governor House.
Addressing a press conference here at his party secretariat, JUI-F chief also opposed extending jurisdiction of high courts and Supreme Court and these were appeal court against the decision of lower courts. He said that there was no land record, no institutions on ground and any decision in haste would be a blunder.
He said that he still oppose merger of Fata into KP and reiterated his stance to leave Fata’s future to its people. The JUI-F chief also rejected census result in Fata and termed inaccurate and faulty and said that Fata’s population was shown much lower than its actual number.
Talking about Khyber Pakhtunkhwa’s government decision to document mosques imams and give them salaries, he warned ulema to beware of provincial government ‘trick’ and dismiss any such offer.
He said that the provincial government is trying to buy ulema and warned the latter to stay away from any such offer. He also opposed new education policy.