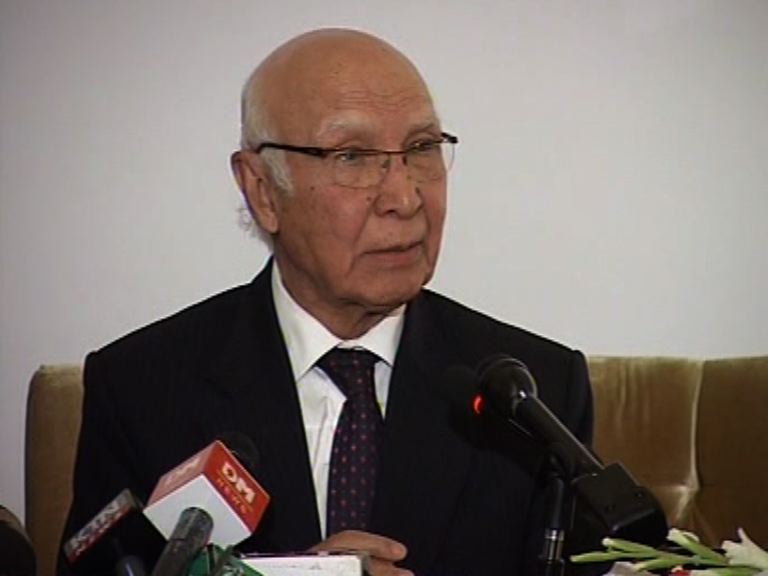 ISLAMABAD, 02 February: The Fata Reforms Committee Chairman Sartaj Aziz on Thursday said that the Frontier Crimes Regulation (FCR) law would be repealed and replaced with new Rewaj system in the Federally Administered Tribal Areas (Fata).
Briefing media following the federal cabinet meeting on Fata reforms, Advisor on Foreign Affairs Sartaj Aziz said that necessary constitutional amendments would be made in the constitution of the Islamic Republic of Pakistan to enable tribal people to elect their representatives to the Khyber Pakhtunkhwa Assembly for 2018 general elections.
Sartaj Aziz said implementation of the recommendation would be gradual. He said that FCR would be repealed immediately in some areas whereas from some areas in phases. He said that Fata merger with KP was approved in principal however according to the recommendations the Fata share in NFC Award would be spent under the federal government supervision.
Minister for States and Frontier Regions Qadir Baloch said FATA people did not get empowerment for 67 years and for the first time they would get their rights.
He said after five years, FATA would be completely merged with KP but the Federal Government would continue to provide funding for FATA Development Plan for ten years. About Rs 110 billion would be spent for development of FATA annually for ten years. Steps would be taken to bring FATA at par with other areas of the country.
The Minister said FATA would not be allowed to be made controversial and black law of FCR would be abolished. He said additional posts of levies would be established in FATA.
KP Governor Iqbal Zafar Jhagra said 85% of IDPs have returned to their homes and the process would be completed before June this year. He said approval of reforms is a historic decision that would change the fate of people of FATA
The cabinet also recommended that connectivity of FATA with China Pakistan Economic Corridor should be ensured at suitable locations.
The recommendations also include the target date for repatriation of all TDPs as 30th of April this year while reconstruction activities would be completed by 2018.
A high level committee of experts would be formed with KP Governor as its head to prioritize preparation of a ten year socio-economic development plan for FATA by 30th of April this year.
NFC would be requested to consider making allocations of 3% of gross federal divisible pool on annual basis for implementation of the Fata Development Plan. This would be in addition to existing annual PSDP of 21 billion rupees. Thirty percent allocations under FATA Development Plan would go to local bodies.
FATA Development Authority would be reorganized under a Chief Operating Officer in BS-22 to supervise and coordinate reconstruction phase.
A Governor’s Advisory Council consisting of Senators and MNAs from FATA would be formed to assist the Governor in carrying out development and administrative functions.
Permits of Rahdari for export and import in FATA would be abolished to eliminate largescale corruption and bring down prices of essential items.
Auditor-General would ensure that development funds and other expenditure of local bodies in FATA are properly audited to ensure efficient utilization.
Jurisdiction of the Supreme Court and Peshawar High Court would be extended to FATA through an act of parliament.
State Bank of Pakistan would encourage establishment of more branches of banks in FATA.
Land settlement in FATA would be planned and undertaken in consultation with stakeholders.
Proper coverage of BISP, Bait-ul-Mal and micro financing would be ensured in FATA.
Quota of students from FATA in educational and health institutions in other provinces would be doubled and retained for ten years integration with KP.
The six-member committee headed by Advisor to the Prime Minister on Foreign Affairs was constituted in November 2015 for political mainstreaming of FATA. The committee held meetings with all the stakeholders and consulted over 3500 tribal Maliks and elders in all the seven Agencies in FATA and the Frontier Regions. The Committee’s recommendations were also discussed in detail in the parliament and received positive response.