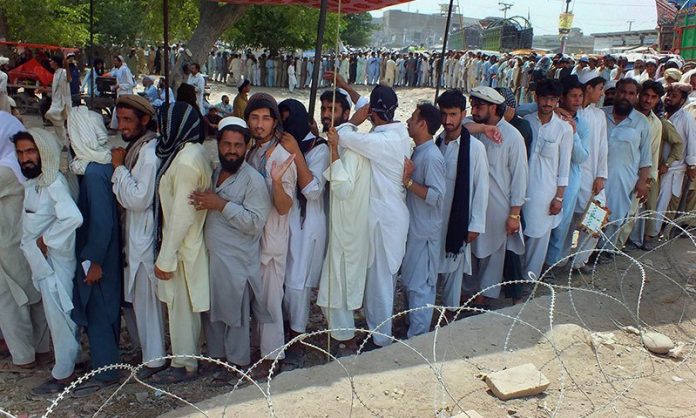 PESHAWAR: The FATA Disaster Manage­ment Authority (FDMA) has released funds worth over Rs190.5 million for the 15,200 families of Internally Displaced People (IDPs) of the North Waziristan tribal district still living in Baka Khel camp in Bannu.

It is the 52nd instalment of the relief package for the IDPs of North Waziristan and each family will be provided two instalments, while the families of Bora Khel in Shin Ponr area will receive their four instalments, said the officials of FDMA.

Dr General of FDMA Sohail Khan said that it is the 52nd financial relief package under which each family will be paid a cheque of Rs 12000 per month. However, he added that the IDPs families of Bora Khel, where each family will be provided four cheques of Rs 12000 as they are not been paid. Thus, each Bora Khel families will receive a cheque of Rs 48000.

Sohail Khan informed that the cash has been deposited in the bank. The IDPs families can receive their cheques from their banks from Thursday. Director General said that amount has been released by the FDMA from its own fund to address the financial difficulties faced by families of IDPs.  He added that the FDMA is also working to release another instalment of the financial relief package in the first week of March.

In the North Waziristan, the IDPs are still residing in camps. In January, KP government announced that the internally displaced persons will be shifted from Bakakhel Camp to their homes in North Waziristan tribal district within two months. It was announced that Chief Minister Mahmood Khan had directed authorities to address issues of IDPs and ensure the provision of basic facilities in the camp.  The KP government spoke persons while making the announcement said that security forces would clear Datakhel area near the Afghan border before the repatriation of IDPs to their homes in North Waziristan.