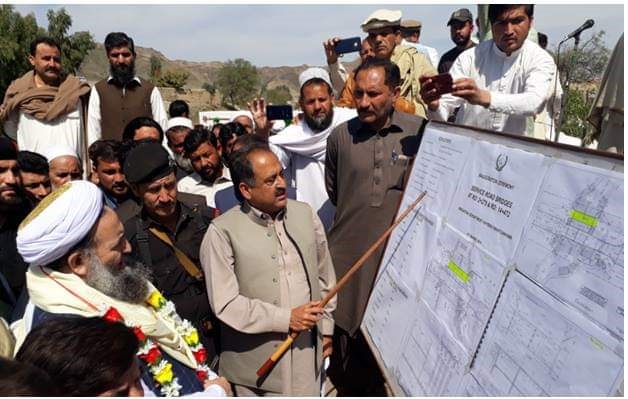 LANDIKOTAL: Federal minister for religious affairs Noor Ul Haq Qaudri has kicked off work on a bridge in Marble Chowk, Mulagori on Saturday. The bridge will be completed at the cost of Rs 21.8 million within 9 months time.

The 130 feet long bridge was the oldest demand of the people of the area, which the minister said is the part of development projects being initiated by the federal government in the tribal districts after its merger with the Khyber Pakhtunkhwa.

“The bridge will provide an easy mood of road communication to tribal people,” said Noor Ul Haq Qadri while addressing the gathering. Qadri claimed that he believes in practical politics and service of the people of his constituency.

The minister said that the federal government is taking practical steps to bring prosperity to the tribal belt a promised with people at the time of the merger with the province. Haji Abdul Manan Mulagori while addressing the gathering thanked federal minister on behalf of the people of Mulagori for inaugurating work on the bridge project.

Woman electrocuted to death in Mulagori

MULAGORI: A woman was electrocuted to death in Sher Burj Saturday. Hospital has handed over the body to the family after completing legal formalities. She has been identified as the wife of Haji Ambar Khan. He said that she was busy in her routine housework when her feet touched a high tension transmission line. As a result, she sustained severe electric shocks and was rushed to the Hospital where she was pronounced dead. Her funeral prayers will be held on Sunday in Mulagori Marble Chowk at 10 am on Sunday.