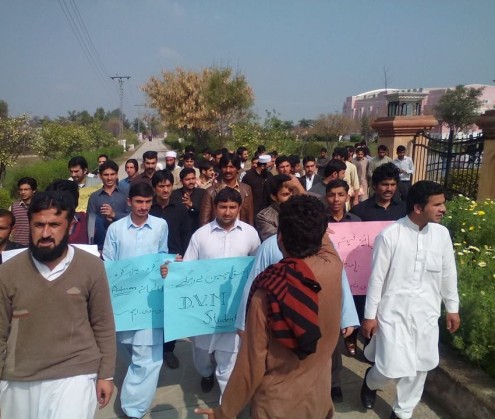 DERA ISMAIL KHAN, 21 February: Veterinary students of the Gomal University continued with their sit-in for fifth consecutive day in protest because they have been demanding remission of examination fee.

At the demonstration in front of the vice chancellor office today, the protesters said former vice chancellor Inayatullah had cancelled the examination fee for veterinary students whereas the new vice chancellor imposed the fee soon after taking charge.

They warned that their protest might turn violent if the vice chancellor did not accept their demand.

“When we were taking admissions, it was stated in the 2011 prospectus that our fees had been remitted. We have been facing this issue for the last three years and every vice chancellor tells us that the fees have been cancelled, but to no avail,” said one of the students.