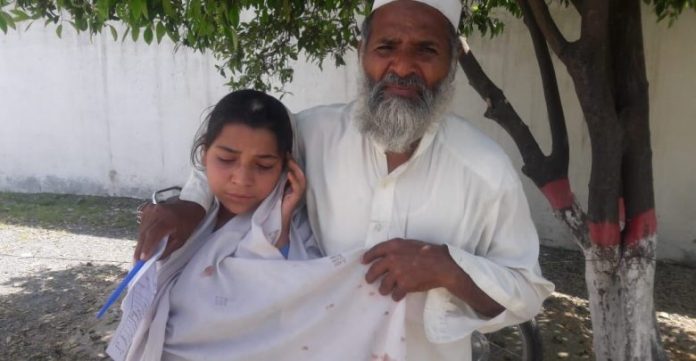 MARDAN: A female school teacher, who brutally beat a 5TH class student, was suspended by district education officer, in Katlang area of the district on Saturday.

The father of the student, Saifullah, registered a case against Aalia, a female teacher at the government girl middle school for allegedly beating up his daughter, Saima, during the exam injuring her ear. The student was taken to the nearby hospital of treatment.

On the complaint of girl’s father, Katlang police have registered an FIR against the 17-grade school teacher and started further investigation.

Saifullah has also requested the Khyber Pakhtunkhwa education department to take action against the school teacher as she has put fear among the little children and discourages them to attend the school regularly.

After the video of the student’s father gone viral on social media, the district education officer of the district (female) has taken notice and suspended the school teacher, Aalia and ordered further investigation into the case.

NOWSHERA: The principal of government girls degree college Rozeena Rehman has been deprived of Rs 50000 cash, a gold ring and service cards by burqa-clad women in Sherin Kotay area of Raisalpur on Saturday.

Rozeena informed Raisalpur police station that she was busy in shopping in the famous cloth market of Sherin Kotay, when unknown burqa-clad women have stolen her purse and deprived her of Rs 50,000 in case, a gold ring and service card. The principal said media that though police have not registered her FIR, however, they ensured her of an investigation into the case.