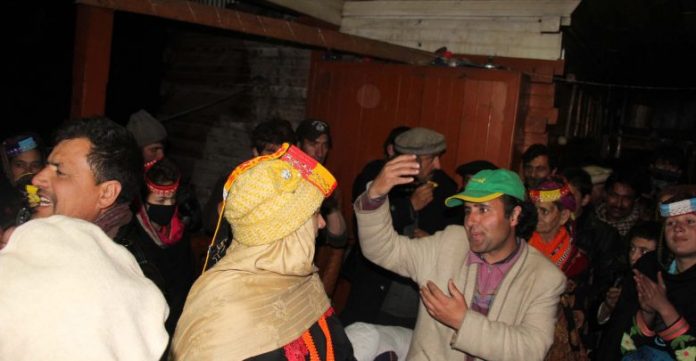 CHITRAL: The annual Chomas or Chatarmas festival of Kalash valley, during which people search their life partners, is underway with traditional zeal.

During this festival, the men from Kalash tribe reach the mountain peak and ignite fire there. After seeing the smoke from the fire, the men, women and children come out of their homes and sing religious songs.

The festival, which kicked off in Bamboret, Rambor and Bareer areas of Kalash valley, is underway since Tuesday night and will continue till 22 December.

During the festival, people of Kalash tribe march through the streets and visit every home. The elderly women in the processions throw walnuts on the doors and sing songs in their local language which carry the message of love and wellbeing. The people inside their house remain awake throughout the night waiting for the arrival of the procession.

The boys and girls chose their life partners during the festival and announce their marriage. The male members live in the rooms for cattle during three days. On return from the processions the people sing songs and dance according to their own traditions. The entry of outsiders to the valley remains banned during three days of festival.

A large number of national and foreign tourists visit the valley to see the festival. A French tourist said while talking to TNN that she is visiting Kalash for the last five years to witness the festival.

A tourist from Belgium, who is a doctor by profession, said she loves the culture of Kalash. She said Pakistan is a lovey place.